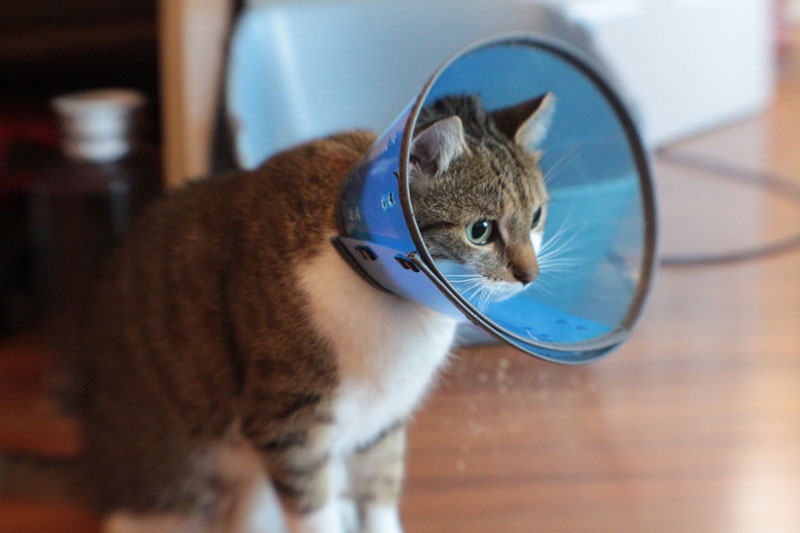 As promised, here’s a little update on Beau’s UTI. Unfortunately, we’re not 100% sure where he’s at… Midway through taking his antibiotics, he seemed completely fine. The bleeding stopped and he was peeing only a few times a day (which is normal due to the amount of water we mix inside of his food.)

Yesterday at 4 in the morning I had the biggest scare when I woke up to Beau wailing. He wasn’t in the litter box, so it wasn’t him being blocked, he was just standing by my head wailing. I took a quick look at his incision site and everything looked fine. No blood (which is easy to see if he had been bleeding, and none of the litter boxes had blood… although I don’t know which cat the pee was from.)

I decided to stay up since Beau isn’t usually the most verbal cat and he usually only speaks when he’s lonely, needs to tell us he’s hungry or is in a lot of pain (usually when he’s at his absolute worst.)

Within the first 30-minutes of me being awake, Beau ended up peeing on our luggage bag. Uh-oh. Then a bit later he found his old bed and peed blood on it. I freaked out, called the emergency and asked if there was anything they could do for him or if we could get a refill of medications. They said that the doctor we went to wasn’t in and that she wouldn’t be in until Wednesday so they would have to charge us the $150 check-in fee again since a new doctor would have to look at him. (Mini-side note… how do you feel about that? Their policy is: we waive the fee if it’s the same problem, but only if you have the same doctor, yet their doctors only work about twice a week. $150 is VERY STEEP especially because it doesn’t include the medications or other exams they will probably have to do. I’m also very used to vets allowing me to reorder medications as long as they are a few days immediately after the prescription ends or months later if they know about Beau’s situation, which I know isn’t the case this time. The doctor also initially said: I don’t think this is going to be enough medication to make sure he’s alright, but we can try and if not you’re able to come back for free for a recheck. CLEARLY STATED.)

I had an odd conversation with the receptionist, who wasn’t the most friendly and actually gave me quite a bit of attitude. The conversation went a bit like this:

Me: Hey, I brought my cat Beau in last week because he was peeing blood. We saw doctor [x] and we’ve given Beau all the medications she recommended us to give him. He was fine for a few days, but today he’s spotting blood again. Is there any way we can bring him in again or refill his perscription?

Her: We can’t refill your perscription, you have to come back in for an exam. The recheck costs $150.

Me: Okay, well when we were there we were told rechecks for the same issue would be free.

Her: Only if you see the same doctor.

Me: Odd that we weren’t told that, but that’s fine.

Her: Well why wouldn’t you have to pay again if another doctor has to see your cat? They don’t know your cat’s history so they have to reasses him.

Me: No, I get that, I’m just not sure why we weren’t told that specifically.

Her: You probably were. I would suggest going to another vet if you don’t want to pay for the recheck fee. It is pretty high.

Me: Well, do you know of any other vets that open early so we can take them to them instead? It’s Sunday, so I know most vets are closed.

Her: Let me get you some numbers. (which I was very appreciative of.)

She then proceeded to give me the number of one vet who unfortunately was about an hour and a half away by walking or 45 minutes away by the metro (which Beau does not do well on at all.)

Me: Thank you. Another quick question. Beau doesn’t seem to be in any pain, he’s actually sleeping right now, so we still haven’t given him any prazozin —

Her: You should have given him everything the doctor gave you.

Me: Actually no, she said that she gave it to us as a precaution of if he’s stressed or is struggling to —

Her: The doctor gives you medication so you can use it not — actually, I see here that she left a note saying that you didn’t have to give it to him.

Me: Okay great. My question still stands as: how important are the antibiotics right now if we keep his stress levels down.  I know you can’t fully say since you might not be a vet tech (a lot of our receptionists in Toronto are actually trained vet techs or pet care graduates who will happily answer all of your questions, especially because they are usually the first to provide triage), and you’d have to see him, but since he didn’t pee blood for about 5 out of the 7 days, I may want to wait until our regular vet is open, I just want to make sure he’s okay and make sure we can reorder medications if we need a longer dosage.

Her: If you’re worried bring him here.

Me: I know, that’s why I’m asking you from a professional’s perspective if this is something I should be worried about. Again, he’s not straining and he’s asleep. You can also say you’re not able to give me advice over the phone, that’s fine.

Her: Just go to your own vet tomorrow.

Me: Okay, great. Thank you.

Her: Have a good night.

I don’t know. I told my hubby about the conversation then wrote down all I could remember about it since I didn’t know if I was overreacting to feeling like that conversation wasn’t pleasant, or if I was being sensitive when I was actually in the wrong, and still don’t know how I feel. I understand that a lot of people who go to vets aren’t very well versed in how to take care of their pets, so they need to be more careful, so I’m not bothered by the “no dispensing refills”, but it did feel like a somewhat pointed conversation.

Either way. We ended up not taking Beau to the vet yesterday because we didn’t want to stress him out with an hour and a half long walk, or take him on the metro, and he seems to be doing fine. He’s peeing lots, no blood, it might have just been a fluke. We’re still going to be taking him to the vet today (I’m writing this on Monday), to make sure that everything is fine and he doesn’t need any more medications and I will keep you updated as always. We’ve also informed our old vet about the situation, and they agreed that the conversation/policy was a bit weird, as they feel like we should have been given at least a second dose of medications free of checkup charge.

The little guy is currently sleeping at my feet in bed, and Kalista is sleeping on my chest. We have an amazing family, and I’m so happy that I found them both. Here’s to making sure Beau gets better!

So Pet Parents, what do you think about this situation? Don’t be worried to say how you really feel, or if you think I was in the wrong/being sensitive. I know I’ve been pampered with vets I’ve known long-term who know my history of pet care education, know that I’m actually hoping to go to school for vet care (when I have the money) and know how obsessed with research I am, so there’s a bit more trust between them and me. So to me, this was a bit of a weird situation.