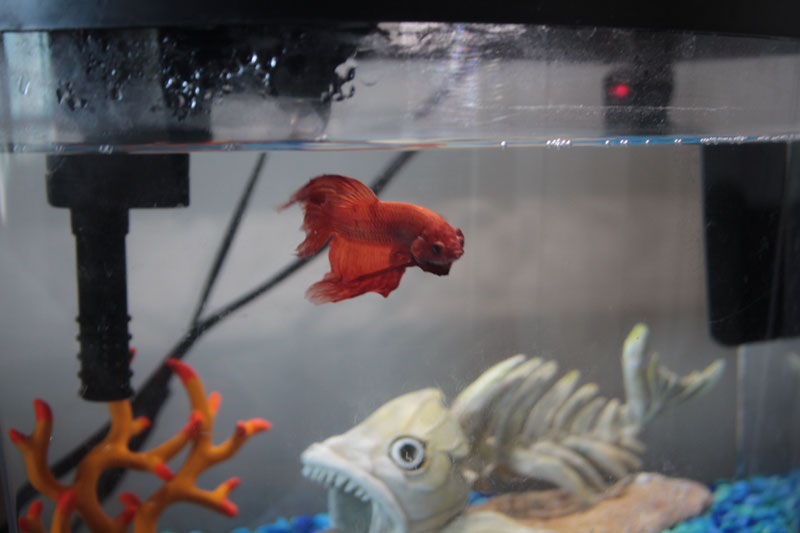 As you may already know, Blub has gone through few health issues as of late (including the notorious Popeye) and while he’s been “healthy” and blowing bubble nests it doesn’t mean I haven’t been worrying about him. This sweet boy has been with us for over two years now, and since we’re uncertain when he arrived at the pet store, we don’t know how close he is to 3 (which is the lower end of the average life expectancy for healthy Bettas.)

That being the case, we want to make sure we give Blub everything he needs to make sure that if he does cross over the rainbow bridge he was living a healthy, happy life and not a miserable sick one.

Blub is looking fairly good. Still one hole in his tail, but it’s definitely been growing back since the health scare debacle, but we’re noticing he’s starting to get a bit lighter, showing some evidence that it may be closer to the end of his life.

This is very hard news for us, as we love Blub very much and have been making sure to take extra good care of him. We’re resting a bit easier knowing that we’ve taken good care of him and since we had the realization that he’s actually at the stage of life where he’s getting “old”, we know that death is inevitable, it’s just a matter of being able to tell how much time we have left with the beauty.

Now, this isn’t to say that Blub is going to pass on soon, but it does mean that he’s more susceptible to illness at this stage and may not bounce back as well as he would have when he was younger. That being the case, I’m really glad and grateful that he bounced back from his previous illness and that we do have more time to spend with him.

Onto the next point of information. I took it upon myself to contact some pet stores in the area to see if they had any advice for me when it comes to Blub and I knew enough about how to take care of Blub, but it turns out I wasn’t entirely correct.

The way I’ve been taking care of Blub is adequate, but there’s a lot that wasn’t taught to me in my “pet store training” and actually, a lot that the pet store I used to work at didn’t supply that actually could have made Blub’s life a lot better. That being the case, I didn’t actually know a lot of the products existed or that they could be beneficial for Blub, so I’m glad I made the phone call now.

It’s actually quite crazy to think about the number of medications that are missing from certain stores because they choose not to supply it, or it’s considered Private Label to another store and actually, it blew my mind when I walked into a Pet Smart that didn’t have a basic medication like “Melafix” which is the most common medication that heals Bettas from most ailments. When I asked the customer service representative if they stocked it her response was: “We don’t as a company, which is weird because we use it in the back all the time on our fish.” How odd eh?

So, let’s get onto some of the things we’ve changed in Blub’s life.

I was never actually taught that you can buy bacteria for fish tanks. As I mentioned in a previous post about how to properly set up your Betta Tank, which I will be changing very soon to include this information, Bettas get stressed in our regular tap water and they need a certain amount of dirt/bacteria in their tank to survive. That’s not to say that Bettas like dirty water, they just need a bit of nitrogen in there to survive. That being the case, there are some awesome products that will let you put some bacteria in when you do 100% water changes so you don’t end up with a stressed or lethargic Betta like we did early on with Blub. That being said, that’s another article I will have to update to explain how I could have avoided the situation. (Side note: I think that’s the coolest thing about running a blog, you can look back at how you used to take care of your pets and see the growth as a pet parent. Blogs are filled with so much useful and important information that can be missed when talked to by “pet experts” at pet stores, or they may not even have the answers. That’s why I’m so grateful I found so many of your blogs. I’ve learned so much from them and I hope to give my readers the same experience. Back to the post now…) Now, I knew that when you do percentage water changes your Betta gets less stressed because you keep some of that bacteria it’s been growing inside of the filter and inside of the leftover water, although I was encouraged to do weekly 100% water changes and to add bacteria in every week and use the same filter for a full month. Before I was doing 25% water changes weekly and changing the filter monthly. The reason the customer service representative recommended this was to make sure that the nitrogen levels didn’t get too high and it would help with fin rot and other ailments without the use of medications (which we’ve used on Blub quite a lot recently.)

The customer service representative also recommended I start using aquarium salt full-time now. She says I should have been encouraged to use it from the beginning as it makes sure your Betta doesn’t get sick with ailments like Ick or Popeye. She said a lot of training courses say you don’t need it because Bettas are considered Freshwater Fish, but aquarium salt is actually meant for freshwater fish too. This kind of blew my mind because there were multiple times I was taught to absolutely not put aquarium salt in with Bettas because it can harm them and a lot of the online guides I read to taking care of your Betta didn’t mention anything about salt, but after a lot more digging I found that she was right! (Not that I didn’t trust her since she had lots of fish of her own.) Aquarium salt actually reduces stress for fish (as we know Bettas get stressed very easily), it also helps the potency/efficiency of medications and promotes gill/fin health for freshwater fish. While knowing that aquarium salt was used for a lot of remedies, I never actually knew it was also used for conditioning, which kinda makes me feel silly! But my lack of that knowledge makes sense, especially because Epson Salt can be used as a remedy of Popeye but should not be used for conditioning.

The representative then stated that she was happy to hear that even though Blub went through the trauma he did that he survived since a lot of fish actually don’t make it through ailments. (Mostly due to poor care) This made me feel a bit better but definitely made me want to do even more research in Bettas and dive deeper into it, instead of the fluffy Betta Care Tips that are the top results. She then told me that I wasn’t necessarily doing anything wrong, but there could definitely be some improvements to my methods. Which is obviously very true! I’m making it my goal to call a few fish stores to also ask them for their advice and see what else I can do to help Blub out and our future fish. While the internet is full of knowledge, it doesn’t mean that it has all the information that’s out there.

So here’s to giving Blub the best life he can have! So Pet Parents & Pet Lovers, have you ever had an experience where you thought you were taught/told all the information you needed to take care of one of your pets? How did you learn about changes you could make to improve your process? 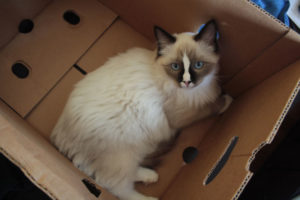