Beau is a cat who started visiting my sister just over a year ago. One night I received an excited phone call from my sister stating that Beau had just started eating from her hand and that I should come over promptly to meet the kitten. I quickly made my way to her house as I had seen pictures of the mystery cat, but had never seen him in the flesh. Beau was extremely friendly but was very skittish at sharp movement (which I am known for.)

After a quick feeding session Beau fled and didn’t come back for a long while.

Later that night we heard a fight between raccoons and we worried that Beau got into a fight. My brother-in-law decided to go out to inspect. This is when Elise, my sister, asked me if I would think about adopting Beau. I was hesitant as I already had my spoiled cat, Walker, waiting at home for me. I honestly wish I had understood the urgency I should have taken when I first met Beau.

After a good half hour of searching my brother-in-law came back to the house reporting that he had not seen Beau. To our surprise Beau came back to our window, sitting upright and looking very frightened. I wish I still had the pictures I took of him that night. (Unfortunately my phone had a defect and I lost all of my photos that weren’t uploaded to instagram.) After a loud crash Beau went running into the backyard and that was the last we saw of Beau that night.

Beau didn’t return to my sister’s place for about a month. This time, when he returned, he had a snipped ear. Elise called me immediately, but I couldn’t pick up as I was at work. She left me numerous text messages stating that she had captured Beau and had brought him to my mom’s house for me to take care of. She told me that I had to choose if I was going to keep him or choose to put him back in the cold. She also stated if I couldn’t take him (as my mom wasn’t ready for a second cat) that I should ask my boyfriend if he would take him.

Initially I left my boyfriend numerous text messages stating what had taken place and asked him if he could take Beau. But when I got home to meet the adorable furrball I sent my boyfriend one final message stating: You can’t have him. He’s adorable and I want him to live with me.

Beau spent the whole night sleeping in my lap. He shivered throughout most of the night, but by the morning he was mewing and cuddling right up to me. I grew onto Beau very quickly and every time he was afraid he would immediately run into my lap.

That’s how Beau and I met, and this website is meant to document all of my pet’s lives. 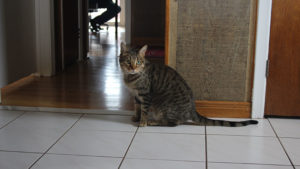 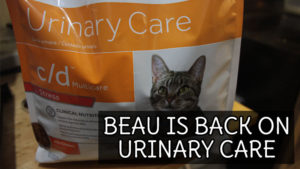