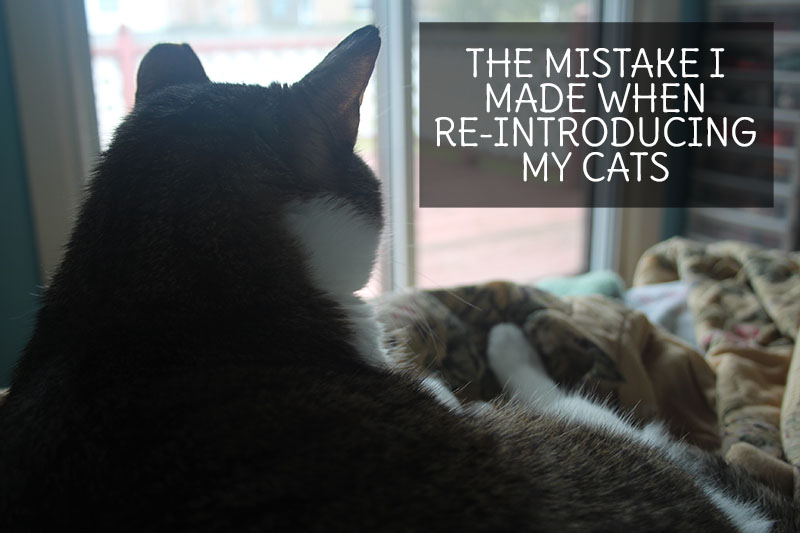 A few days ago I made a mistake shouldn’t have made, but walked right into.

As you may already know a few years back my kitty Beau and my mom’s cat Walker used to live together. While they lived together Walker always seemed to be the dominant cat as Beau is smaller and as Walker had been living in our house for a year prior. We did a good job introducing Beau to Walker at that time. (Making sure they were separated for a week, making sure there were plenty of opportunities for them to meet under a door, and making sure that both were rewarded for good behaviour when they got along once in the same room.)

In the past Walker and Beau got into minor fights, or as my mom likes to call it: boxing matches. I would quickly stop these fights by separating and scolding the two. As the fights became less and less the two cats started sleeping with each other while cuddling. It’s very easy to assume that after a few months of them being separated it wouldn’t be overly complicated to bring them back together, but man was I wrong. 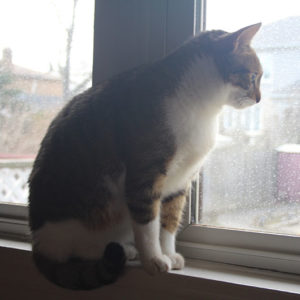 Whenever my s.o. and I travel we always leave Beau with my mother, as we think it is unfair for Beau to spend his whole day alone as he is a social cat. This summer we left Beau with my mom and she reported that Beau and Walker got into a few small fights that were quickly disbanded and the two got along just like they had before.

This time around my mom asked us to take care of Walker. As my mom lives in a house and we live in an apartment we decided to move into her place so the cats would have more space to roam and play. The first day we arrived we separated the two cats for about 3o-minutes. We re-introduced Beau to my bedroom (the room that he would be spending most of his time in, and sleeping in at night.) After this we opened the door and let Beau roam the house free. Within the first few minutes Walker started hissing at Beau. 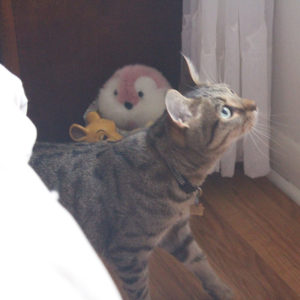 Now, Walker has been known to hiss. He does this quite often, even with humans. He’s an adorable kitty, but he does like his space. As soon as Walker started hissing I made sure to scold him and removed Beau from the situation, taking him to a big window for him to look out of. Beau spent a few hours looking out the window, before Walker started to pounce getting ready to attack.

To avoid the attack, I took Walker to another room to play with him. (Thinking he was just bored.) Man was I wrong! Walker seemed very disinterested and in the time that I left Beau alone he (Beau) made his way under the dining room table to sleep. I should have kept a better eye on my little tyke as Walker made his way under the table and started attacking him. This resulted in the biggest fight I have ever seen between the two. I quickly tried to separate them, but there was no way. Walker was hitting Beau so hard that he (Walker) ripped out two of Beau’s nails. Beau was trying to attack back, but Walker wouldn’t let him get a hit in. When I got a chance, I picked Beau up, running to the washroom to wash off the blood. I quickly sent my s.o. to get some corn starch (as we did not have Kwik Stop in the house.) This helped stop the bleeding quickly. As soon as Beau stopped bleeding, I cleaned his paw with a bit of hydrogen peroxide to make sure that his paw wouldn’t get infected.

It’s been two days and Beau is doing a lot better. We’ve decided to leave Beau in my bedroom and take turns letting the cats roam the house. If we were staying longer than a week I would try to re-socialize them, but I’m feeling like it wouldn’t be worth the time spent if they are just going to revert back to normal.

Has anyone ever been in this situation before? What did you do? Any advice? 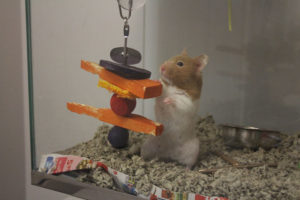