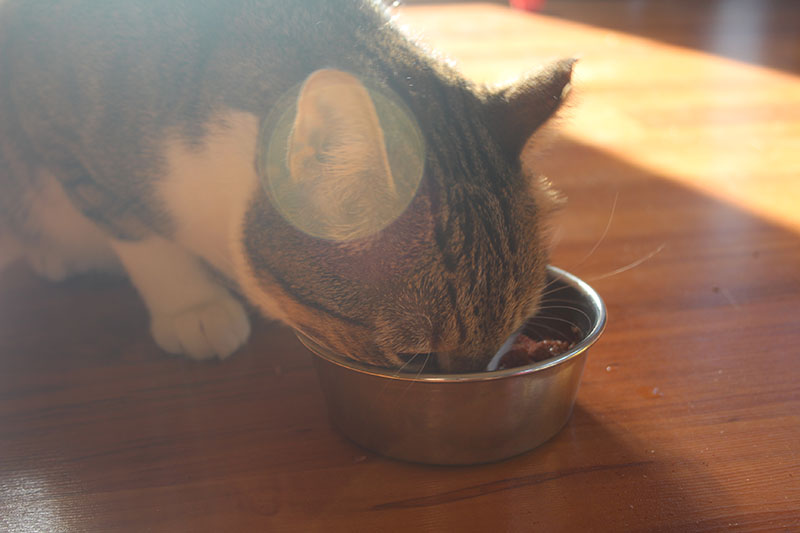 Summer is still not over and Toronto just seems to be getting hotter and hotter. I have to admit, there’s nothing I want more than ice cream and it got me thinking, is ice cream ever safe for cats? We already covered if cats can have almond milk if they can drink soy milk, or if they can drink coffee and our hope is to find foods cats can have to cool off! I mean, if dogs can eat vanilla ice cream, why can’t cats?

Dependant on the quantity of ice cream your cat may become ill from eating ice cream, however, if they eat a little bit they will be fine.

Is Sugar-Free Icecream Toxic to Cats like it is to Dogs?

A lot of sugar-free ice cream have sweeteners like xylitol. Xylitol is actually very toxic to dogs, but it’s not an issue for cats to consume.

‹ ›
I thought cats can’t taste sweet, so why does my cat keep trying to eat my ice cream?

Yes, it’s absolutely true that studies have shown that cats don’t have taste receptors that actually taste sweet things. It’s also true that cats aren’t usually drawn to sweet foods (note: a cat will never actively avoid a sweet food, they just won’t be drawn to it), but there are other ingredients in ice cream that your cat will be very interested in.

One of these ingredients is the obvious milk or lactose. Cats will commonly be drawn to ice cream, but won’t be drawn to things like frozen yogurts or gelato. Other traits of ice cream include the high-fat content as well as the carbohydrates found in the ice cream/whole milk.

Absolutely, kittens may actually be more interested in ice cream since their main diet is their mother’s milk and they’re already very used to the high carbohydrates/fat.

‹ ›
So does this mean that kittens have an easier time digesting ice cream?

Actually, it does! Since kittens are on an all-milk diet they actually produce more of the lactase enzyme. However, as kittens get older and are encouraged to start eating solid foods they stop developing as much of the lactase enzyme and begin producing enzymes that digest meats/protein.

What’s so bad about the ice cream?

Well, as we’ve mentioned before, cats are lactose intolerant and don’t actually have enough of the lactase enzyme to properly digest milk. Although, it is also true that some cats have more of this enzyme than others, so some cats will be able to tolerate larger quantities of milk. For the regular cat, if they are fed too much ice cream it will upset their digestive tract and end up giving them gastrointestinal issues or diarrhea.

Are there Any Long-Term Problems with Feeding Icecream?

Similar to you, if your kitty eats too much ice cream the sugar may cause them to become obese and can cause your cat to develop diabetes. For this reason, ice cream should never be a daily treat and should only be given on a very rare occasion and only in small amounts.

‹ ›
Can Icecream Ever Be Beneficial?

Not really. While it’s true that cats have been known to thrive with unpasteurized milk (and of course meat), ice cream tends to leave no tummy room for other necessary foods to keep your kitty healthy.

Okay, I’ve got it… I won’t feed my kitty too much ice cream, but is there a flavour I should stay away from?

Well, there are certain flavours/brands that are better than others. You’re going to want to stick to Vanilla for the most part and if you can find an ice cream that’s made from goat’s milk, you’ll probably never have to deal with diarrhea.

Can I make my cat ice cream?

Absolutely! This is probably the best way to treat your little one. There are plenty of recipes to make homemade ice cream and that way you can make sure that the delicious treat doesn’t have too much sugar (or any added sugars) and is made from goat’s milk instead of cow’s milk! You may also be able to use pet quality “milk”, although I won’t pretend that I’ve tried it with cat milk. That gets me curious…

‹ ›
My Favourite Flavour is Chocolate, would it be okay if I let my cat have one lick?

I always recommend against feeding your cat things like chocolate or strawberry, so you may want to stay away from the Neopolitan ice cream. Chocolate cannot be processed by your kitty due to the theobromine that’s inside of it. If your kitty has enough of it, they may actually experience toxicity. (Now, at the same time I have heard of cats who have eaten a lot of chocolate, so while it’s not highly recommended if your cat mistakenly eats chocolate, you may not have to rush them to the vet immediately. Monitor your cat to see if there’s a shift in their actions, or if they end up vomiting or have diarrhea. Remember: dehydration is a huge cat killer, so if your cat is losing fluids you have to rush them to the vet.)

I always get brain freeze, will my cat?

Funny enough, yes your cat can experience brain freeze. Cats are actually more similar to humans than most people think. They actually have the same type of nerves/nervous system pathway that we humans do. Interesting, eh? Now, it’s hard to fully understand how a cat would experience brain freeze, but it can be said that cats do get fairly bad headaches. Don’t believe me? Check out this viral video!

Is there any way to avoid “brain freeze”?

Yup! Leave the ice cream out for a bit so that it’s not as cold when you cat finally gets the chance to eat it. This is true of other frozen treats you try to feed your kitty. Since cats have a higher internal temperature than us they get cold faster. Think about it, why does your kitty love sleeping in the sun even on the hottest days of the year? Honestly, I’m a bit jealous of their heat resistance… I’ve been melting all week!

So Johnny, would you feed your kitty ice cream?

Probably not, since there’s no nutritional value, but in the summer I sometimes like to give my cats cold broth, ice cubes or lactose-free milk (some being: WHISKAS CATMILK PLUS Drink for Cats and Kittens, Cat Sip Real Milk Treat for Cats and Kittens, KMR – Kitten Milk Replacer, PetLac Milk Powder for Kittens, and PetAg Catsure Powder.)

Other foods you might be curious if cats can or can’t eat: