I didn’t grow up around many pets, so I had no concept of an animal overeating. For example, I thought that you could leave food out for your cats all day and your cats would portion control to make sure that they never ran out of food and starved later. But that’s something I quickly learned wasn’t true.

I remember my sister telling me a story about how a friend of hers was watching over his parents’ fish and he ended up feeding the fish all of the food at once so he didn’t have to check back on them. He obviously did not realize that the fish would eat too much and that the remained of the food would rot over time. Now the sad reality is that some fish ended up kicking the bucket while others grew in size… either way, overfeeding the fish was not a good choice.

While mistakingly overfeeding a few pellets every so often isn’t harmful to a fish, overfeeding does become harmful if done consistently. Bettas have very small stomachs, roughly the size of their eye and should only be fed in small amounts a couple of times a day. Overfeeding, as mentioned, can cause weight gain, but it can also cause constipation which if left untreated can lead in an obstructed, dead or sick fish.

Oftentimes constipated fish become lethargic and will hang out at the bottom of the fish tank. That being said, constipation is a fairly easy ailment to cure, although it’s also just as easy (or easier) to avoid. 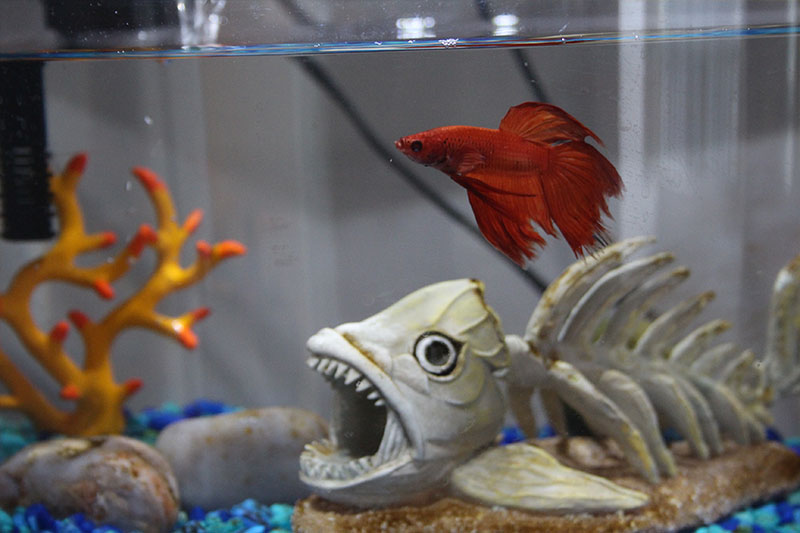 HOW TO TELL HOW MUCH YOUR BETTA NEEDS TO EAT

Unfortunately, the amount your betta needs to eat is not always straight forward as it highly depends on their energy levels and the type of feed you’re giving them.

Both of our fish were eating regular sized, soaked pellets. We gave them three pellets in the morning and three in the evening, making sure to starve them once a week to keep them from getting constipated and away from a bladder infection.

Pellets seem to be the most common type of betta feed, although, I’ve personally seen a rise in betta fish owners feeding “baby pellets.” These pellets are merely smaller in size but should have the exact same nutritional value as regular sized pellets. That being said, you will need to feed more pellets

Many people recommend feeding your betta fish as much as they’ll eat for 2-minutes, although I feel like this is a bit of a hard metric to keep track of. This, to me, is most helpful if you have multiple betta fish and want to feed them at the same time. Otherwise, all feeds should have feeding guidelines on the side of the packaging, though I would take them fairly lightly (as they commonly recommend to overfeed).

As a general rule if your betta fish does not finish all of their food make sure to remove the leftover food or else it will begin to rot and raise the level of toxins in the tank. Bettas, while hardy at times, are fairly sensitive to unclean water and are very susceptible to illness, though usually curable.

HOW TO TELL YOUR FISH IS OVERWEIGHT

An overweight fish should be easy to spot as a fish’s stomach expands fairly quickly if they overeat. Betta fish should always be slim in appearance without any parts of their stomach sticking out. If your betta appears to be overweight, simply feed them less and/or debate getting them a larger tank.

In general, I recommend getting a tank that is at least 2.5-Gallons in size as smaller tanks don’t have enough space to allow a betta fish to thrive. Not only that, betta fish that are left in tanks that are too small for them to thrive will actually not grow to their full-size. You can check out some of my favourite tanks here.

WHAT IS THE BEST FEED TO FEED A BETTA?

The best feed is fairly subjective and will honestly depend on what is available in your area. Most pet stores (especially general pet stores) will only have pellets, though some may supply live feeds and other alternative feeds. You can read more about them and their benefits here.

It’s always good to feed your betta fish twice a day to ensure that you do not give them too much food and reduce the chances of constipation and digestion issues. Bladder health can also be kept in check by starving your betta fish once a week. 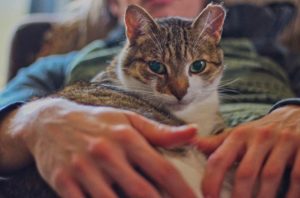 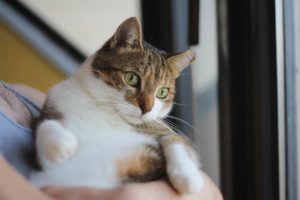