It can be a shock when your little ones suddenly become pregnant, even if they are fish, but what may be a bigger shock is… your Betta being pregnant! The biggest reason for this is… your Betta ISN’T pregnant.

I get a bit curious when I get e-mails or questions about how to properly take care of a pregnant Betta, but it’s not the most common knowledge that Bettas don’t actually give live birth to their babies and actually use bubble nests to procreate.

Even though female Bettas don’t become pregnant they do show signs of being fertile, just like male Bettas although the signs are much different! 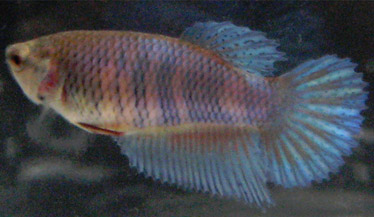 The best way to tell if your female Betta is ready to mate is to see if stripes have formed on their body.

These stripes are vertical and are commonly white or a lighter variation the fish’s dominant colour.

Remember: Horizontal black lines tend to be a sign of stress and you may want to make some changes in your Bettas tank to make them happier!

Will every Female Betta Stripe?

No, not every female Betta will stripe, but you can easily encourage them to stripe by placing them near the male Betta.

Please make sure to be very careful with this by floating your female Betta in a container or bag at the top of the tank.

You can also invest in a tank with a divider, however, I wouldn’t keep the Bettas together for a long as this will stress them out.

Are there any other signs that the Female Betta is ready?

The female betta will have a white dot/tube on her body called the ovipositor.

The ovipositor will become visible when she is ready to breed.

This can be easily seen in the photo to the left (sticking out a bit to the left of her front fin), and you can also see how big she may get when filled with eggs!

So… what happens next?

Well, if the female Betta feels like the male’s nest is quality then she allows the male Betta to squeeze the eggs out of her ovipositor. Interesting, eh?

If she isn’t interested she will destroy the bubble nest… how rude!

So after all this, it does make sense why you could confuse a fertile Betta as a pregnant Betta, but don’t you worry, if your female Betta is ready to lay her eggs it’s okay to let her expel the eggs with no male present. It just means that the eggs will not hatch and will instead “fry.”

It’s important to understand that there is no biological way for a Betta to become pregnant, even if there is a male present. 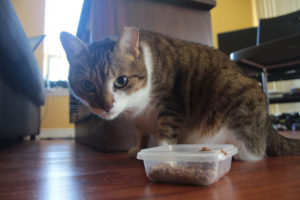