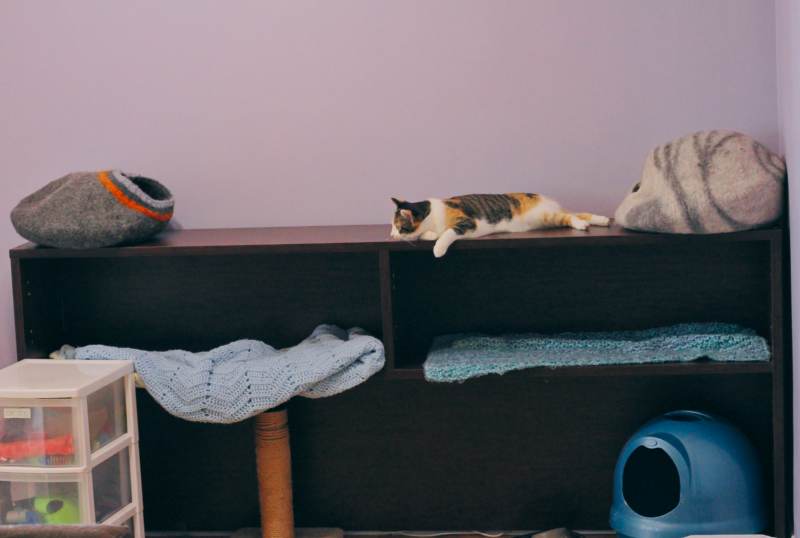 These past two weekends my partner and I have been taking steps to make our apartment more homely and well… more organized!

I would be a liar if I ever said that we fully moved in when we moved almost a year ago, especially because some of our things were still in boxes, lots of things didn’t have homes to live in, and truthfully both of us were fairly embarrassed whenever we had people over because months were passing by and everything pretty much stayed in the same spot.

Well, as we sifted through the belongings we were ready to donate and put the things we decided to keep in their new homes we noticed that we no longer were going to need the hutch to my partner’s office desk. Although hutches are extremely convenient when it comes to storing your belongings, we thought it would be a much better cat tree!

So, we disassembled the hutch, took off the doors, put the cat’s meowfia beds on top, put blankets into the shelves and put the litterbox at the bottom. By far this is one of the best decisions we’ve ever made.

While we love our AmazonBasics cat tree and so do the cats, we love the idea of having a number of places for the cats to jump and sleep. 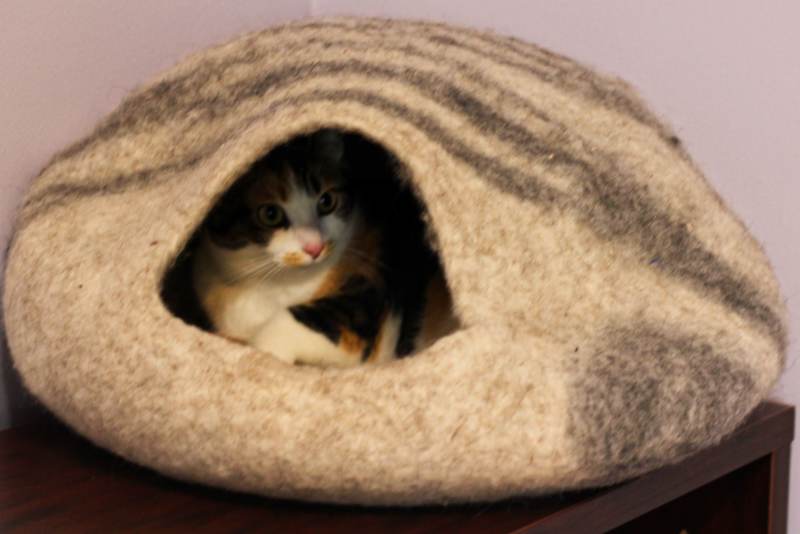 We’ve recently also taken the time to reorganize our bedroom, making sure that we made a few multi-levelled tiers for Kalista to jump to the top of. If you’re a regular reader you may remember the layout of our old bedroom where Kalista would spend the majority of the nights sleeping on top of our bookshelf in her carrier. Although more recently Kalista has been joining us in bed, we knew Kalista missed her spot on the bookshelf and the night we had made the multi-level tiers Kalista immediately jumped up to her safe-spot as if it was there all along.

Now, whenever my partner goes to bed Kalista jumps up onto the bookcase to sleep. My partner has been a bit worried about her falling off the bookcase, but she has been “loafing” on the top versus lying with her tummy up so I’d be surprised if she rolled off the bookcase. I’m curious to know what your thoughts are on this, or if you have experiences with cats being about 7-feet in the air.

Besides the shelf, I’m oddly shocked with how much time Kalista is spending in her meowfia bed. I mean, we all knew she loved them because she could hide in them, but for a few months, it was only Beau who was using them as Kalista spent a lot of time sleeping on the top of the cat tree.

Similar to the bookcase, the day we moved the hutch and put the meowfia beds out on top, Kalista never left. Early on there were a number of times we’d call out for Kalista and while on a normal day she would meow and march her cute little tush our way, she refused to leave her bed. It often scared us because we thought we locked her out or in a room, but no… she was just happily napping. 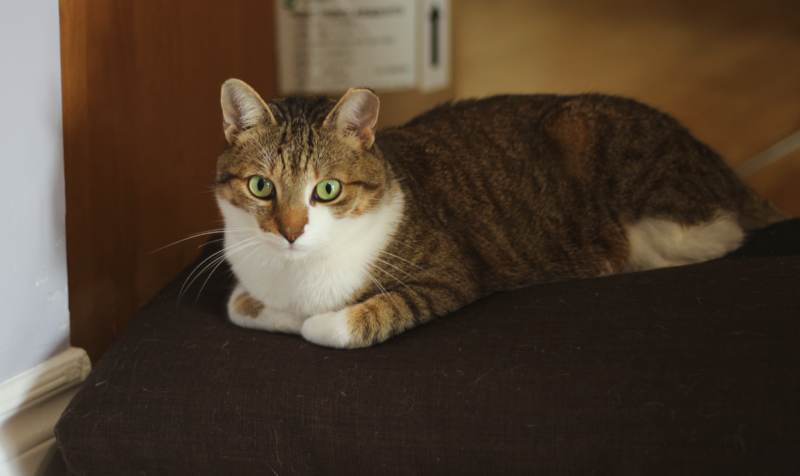 We also noticed a bit ago that if you knock on our front door (even from the inside), Kalista gets scared because she knows someone is going to come inside and chances are it’s a stranger. So, I was curious and knocked on the door to see if she would run under the bed as she commonly does and to my surprise… she didn’t! She ran to the hutch and hid in her bed, which is conveniently closer to the front door than the bedroom (which is why I was shocked in the first place that she didn’t feel safer to run under our bed.) I’m glad though!

We’ve even started this game with Kalista where we’ll call her name and ask her to come into the other meowfia bed. Honestly, we didn’t even need to give her any treats. I guess she found it fun running, jumping or walking from one bed to the other because she starts hunting my hands shortly after and acting all crazy!

Beau is a bigger fan of sleeping in the shelves of the hutch, though he doesn’t use it nearly as much as Kalista. Beau’s current favourite spot in the house is his bed on the storage tower right by my desk. As soon as I get out of bed, Beau comes running after me to my office to jump into his bed. Every so often he’ll get out, walk across my desk and sleep on my lap, but since our summer has been pretty hot… I’m glad he’s staying in his bed more often than my lap! Kitties get hot, eh?

We’re thinking of adding to the hutch soon though. Make our own variation of a cat tree. We bought some sisal and have an old headboard we found months ago that we’re going to cover. It should make a much larger scratching post than anything we’ve bought in the past and to be completely honest… if this works well it’s going to be so much cheaper than buying one of those huge scratching posts!

So, friends, that’s an update on Kalista’s newest favourite place. I’ll let you know what changes we make in the future! 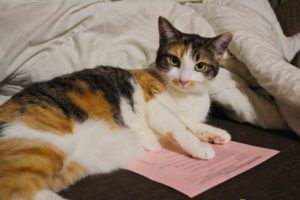 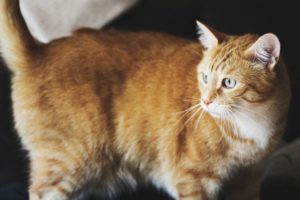