About 4 months ago I became the proud owners of the Iris Top Entry Cat Litter Box and let me tell you, there is absolutely no looking back.

My sister is a lot more adventurous than me when it comes to trying out new cat products, so she was the proud owner of a ModKat Top Entry Litter Box, which while amazing, was definitely out of my “kitty spending budget.”

So, we took to the internet and found a litter box that did what the ModKat did, but for a lower price.

I’ve been extremely happy with my Iris litter box. It stores a lot of litter, there’s hardly any tracking, and my cats seem to prefer it over the other two litter boxes for some reason.

While, I will say, top entry litter boxes aren’t everyone’s jam (especially for picky or elder cats), but they sure were my cats’ jam!

I will also say, even though I’ve been extremely happy with my Iris litter box, it doesn’t mean that I haven’t been scouring the internet for other litter boxes to try… so I thought I’d share some of my top picks and why I like them so much. Let’s get started! 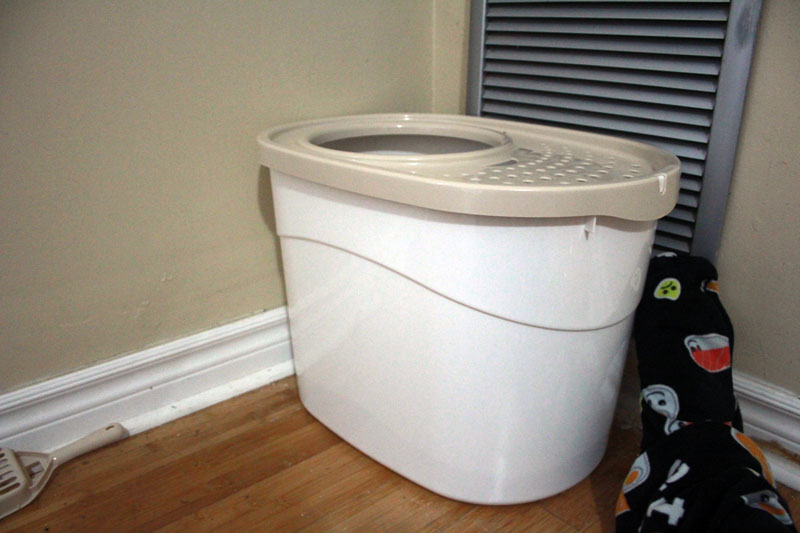 I’ll start off by saying, I don’t have the litter box to the left of this text. The litter box I have is the one linked above, but for some reason, I can only use the picture you see on the left.

The main difference between these two litter boxes is the top where the litter is supposed to fall. The one with the round holes tends to be more effective, however, both have been rated extremely well.

I love the litter box I have because of how large the deposit holes are. I also love the fact that the top has a lip that catches some extra debris before the cats jump off the top.

That being said, some litter does stay on the lid, but I’d rather that then on the ground.

To this day, I’m sweeping up such minimal litter, making it easy to just ignore until our weekly apartment-cleaning days.

I was actually going to get this litter box initially, but at the time the IRIS litter box was a better price (since we’re from Canada.)

Although, not the most attractive, this litter box seems to store a good amount of litter, and it has holes on the lid to make sure litter falls down.

I personally still prefer the IRIS design over this one, just because the IRIS allows you to completely take off the lid of the litter box. This lid is attached to the litterbox and I can see litter getting stuck in that as well. It would probably also be inconvenient when it comes to washing out the litter box as well.

This is by far one of my favourite designs for a litter box and is honestly one of the most ideal I’ve seen so far.

This Modkat litter box allows you to configure the litter box to suit any cat’s needs. It has access through the top, which has two latches for you to clean.

It also has a latch on the side that lets you create an access point for your cats through the side if you have a cat who doesn’t end up liking the jump. The entrance still has a ledge for your cat to rub their paws on. The only thing is… I’m unclear whether or not the ledge’s circles have holes in them or not. If they don’t then… boo!

The top of the litter box definitely has holes for the litter to drop from.

A convenient part of this litter box is the fact that it comes with a reusable liner for both top and side entry use. All you have to do is rinse off the liner (and give it a light soapy scrub) when you need to clean the litter box and replace it!

I’m a huge fan of convenience and anything that saves me time makes me happy!

Didn’t you just show me this? Kinda. This is the Modkat litter box that my sister actually got and while it gets the job done, the one above is a bit more intricate.

This litter box only features a top enterance and the grate that your cat dusts their feet on has to be removed every time you want to clean the litter box. Honestly, it’s a fairly smooth process and I would say that I would choose this litter box over my litter box any day, but if I’m going to spend the money on the litter box already… I might as well try something cooler, you know?

The perk of this litter box is that it also comes with a reusable liner, which comes in very handy when you have to clean.

You can always depend on Amazon to source or create every product you could ever ask for.

This is a tall litter box that will store lots of litter, however, I’m really concerned about the amounts of grates and the frequency. It’s really going to have to depend on how durable the plastic is, because if it’s brittle… we have a problem!

The lid swings open from the centre, which is a really interesting concept. I do wonder if cats knock them open on their way up, but I’m sure that’s fine unless it’s too rough.

It’s a “worth-a-try” kind a litter box for me, especially for the price.

While I’m a huge fan of the top’s design for this litter box, I feel like it is much too small.

You also won’t be able to store as much litter in one of these boxes, and the lid makes it inconvenient to clean regularly.

Still, it’s a pretty decent candidate, though definitely not a favourite.

I’m a bit wary of this litter box, only because it doesn’t really have much room for litter to go when your cat wipes their paws.

I feel like it’s going to be very similar to how litter mats work, which I find somewhat effective.

I truly think that a lot of residue litter is going to stack on the top of this litter box and you’re going to have to clean that after every clean or your cat will knock it off the lid. So it’s fairly low on my list of litter boxes to try.

While I’d say that the selection of top entry litter boxes isn’t big, I think we have some good candidates to choose from. I’ll say it time and time again. I’m such a huge fan of the Iris Top Entry Cat Litter Box, but I can’t say I’m not tempted to try out the Modkat XL Litter Box, Top-Entry or Front-Entry.

I’m more than happy to spend a bit more money if it saves me the time it used to take to clean up my cat’s messes. I’m especially happy to if it keeps my cats happier! No litter on their paws means less cleaning for them too!

So Pet Parents, what do you think of these litter boxes? Did you see one that you might get? Have you tried any of these before? Let me know in the comments below! 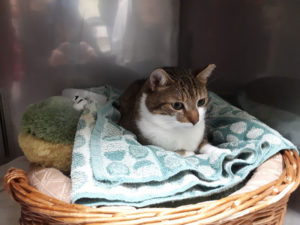 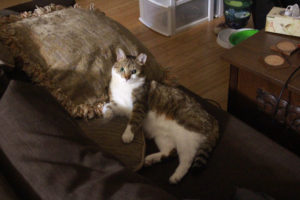