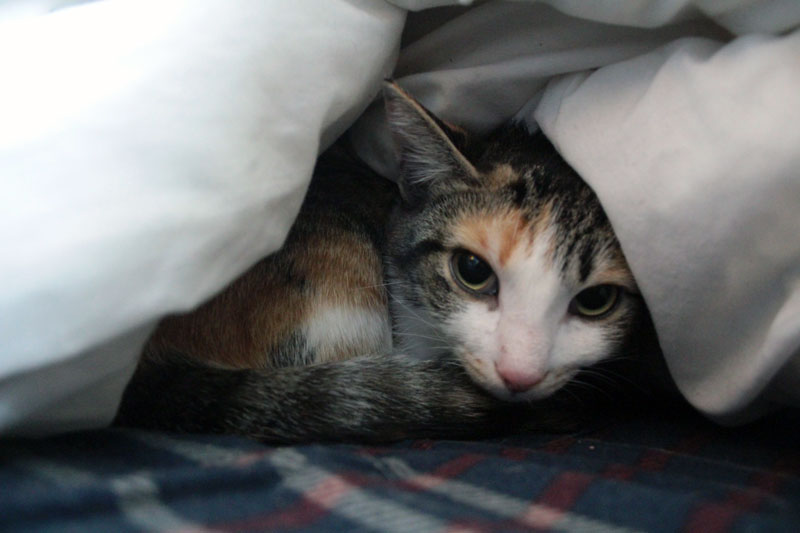 Recently I’ve been working with folks who are working on writing their memoirs and their stories have inspired me to collect more of my stories while I’m younger so I have something to look back on when I’m older. I guess that’s a big reason why I started Pets Overload in the first place. To share my experiences with my pets and potentially share some of them to help other pet parents.

Well, sometimes I forget to share the small and sweet moments that happen in our family, so I’m going to try to make a point of doing it.

When we first got Kalista she was extremely shy and nervous. She spent a lot of time hiding and we didn’t see her much, even though we had her alone in our bedroom.

When we weren’t around we made sure to turn on some calming music and I even tried some of my own to see if it would calm her down and while it did help, it took her a long time to adjust in comparison to Walker or Beau.

The odd thing about her is sometimes, even if she was alone, she would sleep under the bed on top of rolling storage space, which I highly recommend if you live in a tighter space.

I wish I had written about this, but a few days into having Kalista I had found her soaked in urine on one of these containers. I was confused and started looking at reasons why a cat may pee on themselves while they are sleeping. The regular answers regarding why cats pee on beds showed up, but not too much in particular to why cats pee while sleeping.

There were a few forums that suggested that either your cat had a UTI, or if they are female cats who had recently been spayed it might be an incontinence issue that would not go away on its own. Commonly female cats with this issue must undergo surgery or hormone therapy. There were also very, very, very few posts about the fact that it might be anxiety, so we were pretty scared.

I called some vets in the area to see what they thought of the matter and most suggested that I wait and see if she does it again. They said as long as she’s not blocked then we were fine. A few suggested I buy some medications for urinary tract infections “just in case”, but that’s always weird to me. I’d rather give my cat medications when I know for certain they have something, rather than just medicate for the sake of medicating.

Either way, back to the story!

I contacted the rescue since I was still considered Kalista’s “Foster Parent” and told them what had been happening and asked for their guidance. They said that they would have to be the ones to take Kalista and that I wasn’t allowed to be present at the vet visit. They would also make the decisions as to what treatment Kalista received and would be paying for everything. This was understandable, however, we all agreed that we would wait to see what happened.

About a week later Kalista did it again. It was so odd though since she was already getting along with Beau. It was particularly strange because she showed no other signs of health problems and no visual signs of distress. So, we contacted the rescue again who told us that they would be able to pick up Kalista and take her to the vet, however, we wouldn’t be able to have access to her for a night or so. I was very uncomfortable with this.

Being fairly recently separated from Beau due to medical emergencies I didn’t want to be separated from Kalista. Not only that, because Beau and Kalista were getting along so well we didn’t want to separate them for too long so Beau didn’t get stressed out. Which we ended up finding out would have happened as Beau got another UTI shortly after due to stress.

My partner agreed with me but started getting me mentally ready to be separated from our new baby. We started getting everything ready when my partner turned to me and said, “Babe, we should make sure to send her with her favourite blue toy!” And that’s one of the many ways I can tell that my partner is a good pet parent. He’s always thinking about how to make sure our pets are comfortable and happy. He knew that if Kalista was going to be gone from us that long she’d at least want something familiar to play with or something to remind her of us.

The great news was, the rescue actually let us become Kalista’s pet parents earlier than we planned so we could take her to the vet ourselves. While we were so thankful for the offer to get her checked by a vet, we decided we couldn’t separate our pet family for that long, even though it was early on!

We never did get an answer on what was going on with Kalista peeing in her sleep. It only happened twice. Weird. 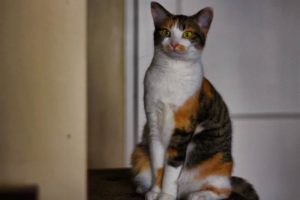 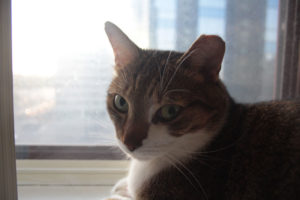