Every so often I like to spoil my cats with toys or goodies to see if they like certain products more than others and I stumbled upon a nifty self-groomer.

To be honest, I’ve always been apprehensive about buying a self-groomer, since our first cat, Beau, doesn’t really headbutt or scent, but since our newest addition, Kalista, loves attention and rubs her face on literally any surface she can reach we thought she would make use of one.

That being said, the Catit Senses 2.0 Self-Groomer seemed like a great choice for us because of how inexpensive it is and because of the positive reviews, it seemed to get on Amazon as well as other market sites. 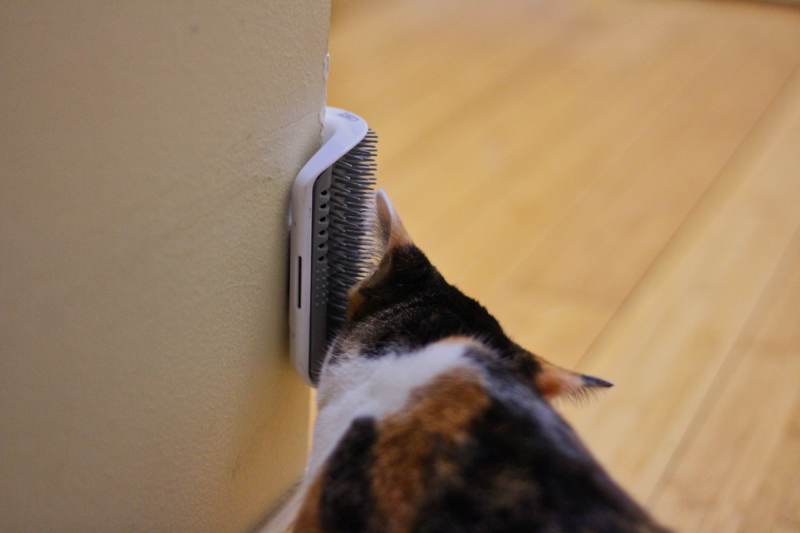 The Catit Senses 2.0 Self-Groomer is a fairly large brush that can be stuck to virtually any surface. It comes with 8-strips of double sided tape (which we only used 2 of) which we used to attach to the corner of a wall.

We chose to stick the groomer onto the corner of a wall, versus a flat surface because Kalista is known for rubbing herself against them. We assumed that if we placed it in an area she already scents she would begin using the product immediately, which was actually very true.

The groomer comes as one piece but can be separated to expose a few ledges on the inside which can be used for Valarian or Catnip. That being said, this product comes with some catnip.

It is also possible to mount the groomer with screws, however, in the 2 months that we’ve had the groomer it seems like the 2 adhesive strips we’ve used were good enough to withstand Kalista’s incessant scenting.

SETTING UP THE PRODUCT

Setting up this product was extremely easy. As mentioned, the product comes with some adhesive strips which seem sticky enough to withstand some pressure/weight. I will, however, say I did not put this product through a stress test (me pushing on it to see if it rips off the wall) because I knew I had the option to screw it to the wall if it falls down. I also wanted to see if it would fall on its own to give more legitimate feedback.

We set the product up about 4 inches from the floor, making it an ideal height for Kalista to push her head down to rub her face. 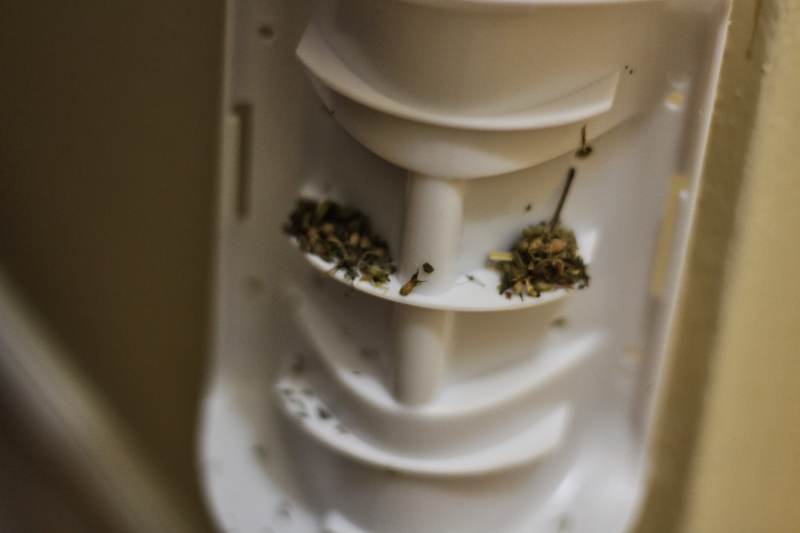 A PLAY-BY-PLAY OF THE EVENTS THAT TOOK PLACE

I will say, the first day this product was mounted on our wall both cats completely ignored it.

Now, that’s fairly common for cats, especially because I originally didn’t put the catnip inside of the product to see if the cats would recognize the bristles since they both love being brushed.

Near the end of the first day with the product, I tried to brush Kalista with the self-groomer by placing her near it and encouraging her to rub both her body and face on it, but Kalista (being Kalista) kept walking up to me to get pet.

The next day I put some catnip into the groomer to see if it would help encourage Kalista to groom herself, and at first, it didn’t seem like she was interested. Now, this isn’t usual for Kalista as she’s usually like my mother’s cat, Walker, who is what I call a “catnip fiend.” But I decided to leave it there and see if she would visit the groomer on her own accord later.

It was only on the second night where I heard a little scratching coming from the hallway and it was Kalista rubbing her cute little face against the groomer (but only her face.)

Since that night, Kalista has used the groomer fairly religiously. She still only rubs her face against it and doesn’t seem like she’s interested in grooming the rest of her body. I guess I assumed that she would use the groomer for a “full body experience” or “full body groom” but that doesn’t seem to be the case, bringing me into my next point.

CONCLUSION & MY FINAL THOUGHTS ON THE PRODUCT

As much as I love the fact that Kalista likes rubbing her face against the self-groomer, I don’t think it’s doing what it was intended to do.

In the two months that the groomer has been in our household, I haven’t found any hair attached to it at all. That being said, I also haven’t seen Beau use it at all, although I haven’t really tried to persuade him as much as Kalista since he’s not a fan of catnip.

It’s a bit of a shame that my cats aren’t brushing themselves with this product, because, in theory, it could definitely cut some of my brushing time down, but I guess that’s too hopeful for a stationary product.

I still think it’s worth a shot at trying, especially because it seems like Kalista is happy with it being in our apartments, but don’t get your hopes up if you want to get the task of brushing out of your life.

All-in-all I would give this product a 3/5 because it’s being used, but not for the advertised reason.

So pet parents, have you tried this product out before? Did your cats groom themselves fully with it or did your cats do the same thing as Kalista? Let me know if you have a better self-groomer to recommend, because I definitely want to try a different one out now. Let me know in the comments below!

Edit 1/26/2020 – I know it’s been almost a year since I last wrote about the Catit Senses 2.0 Self Groomer Cat Toy and I have to say that Kalista still uses it regularly, but I haven’t noticed it do much grooming.

I’ll restate that if you’re trying to find a groomer that helps keep your cat brushed, this isn’t the one for you, however, if your cat loves to bunt or headbutt you or objects, the groomer is amazing.

I haven’t had to refill the Catit Senses 2.0 Self Groomer Cat Toy with catnip since placing it and truthfully, I don’t know if I’d repurchase this product. 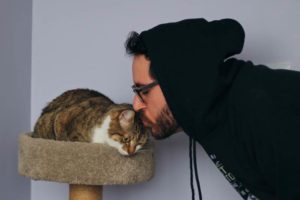