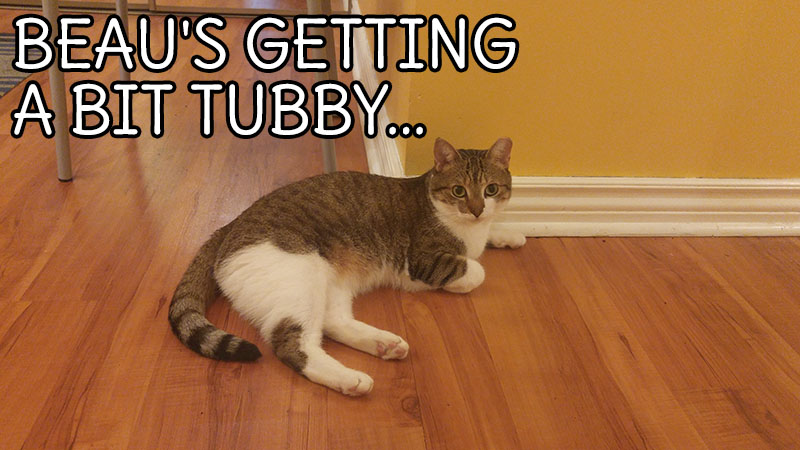 So as you already know we recently changed Beau’s feeding schedule & his amount of feeding. Beau is currently getting fed 2/3 of a cup of kibble (1/3 of BLUE Salmon and Potato and 1/3 of Performatrin Ultra Lamb and Brown Rice). Although he does not look very tubby in the photo above, he has gained a bit of weight already and has been a lot less active than he normally is.

Beau, being the affectionate cat that he is, always likes to sit in the same room as my significant other and I. Beau would often paw at us asking us to play with him and that is how he would get his exercise. Beau also has a number of toys out like springs and balls with bells, but he hasn’t been using them as much anymore. Even when I pull out his favourite feather wand, he sits and paws at it instead of running around in circles. This, of course, scares me. First, as a cat who may have Pica this mean that he may get even more bored and start eating more foreign objects. It also means that he will be less happy and playful, which is a trait that I absolutely love about Beau.

Obviously the diet was the newest change in Beau’s life, so we’ve decided to reduce his feeding to 1/2 a cup of food. (1/4 of BLUE and 1/4 of Performatrin.) Hopefully this can help him feel lighter (in hopes that he starts running more again and actually playing!!). Also, as soon as the BLUE is finished, I think I’m going to start feeding him from the SlimCat Ball only. (still twice a day.) That way he can stay more active.

Those are the biggest things I can think of. Any advice Pet Parents? Someone have a cat that gained weight very quickly due to food change?