Hamsters have quickly grown to be one of the most common “starter pets” that families get their children. When children ask for pets it seems like common replies are: dogs are too much work, fish aren’t entertaining enough and cats will ruin all of the furniture.

I know growing up, no one in my family had any pets other than one of my younger cousins. Her parents got her a few hamsters since she was an only child. And while we had a few interactions with her hamsters growing up, I didn’t know that there was a whole world to learn about hamsters.

For example, I had no idea that my cousin’s hamsters made any vocalizations since the only thing I would hear about was how squeaky the wheels would get at night. I also didn’t know that there were proper care methods and precautions you had to take since everyone sold taking care of a hamster as being easy. Although, things obviously changed a lot when my partner and I became hamster parents ourselves.

For my mom, knowing that an animal was going to be loud or would constantly be making noise was a big “no-thank-you.” Although, I would still say that her main reason for saying no was because she knew we weren’t going to clean up after any pet and most of the responsibility would be hers.

In my experience, I didn’t find Twitch, our hamster, to be loud. She lived in our office, so we were pretty much always around her, but most of the time it was like she wasn’t there.

There were moments where Twitch would make noises because we were holding her, or when she would chew on her small cage (before we switched her over).

Now, that being said not all hamsters are quiet. Hamsters have an array of vocal sounds as well as non-vocal sounds (ie. their activity and playtime.)

It is important to know the different noises hamsters make, especially so you know whether or not your hamster is sick or has hurt themselves. 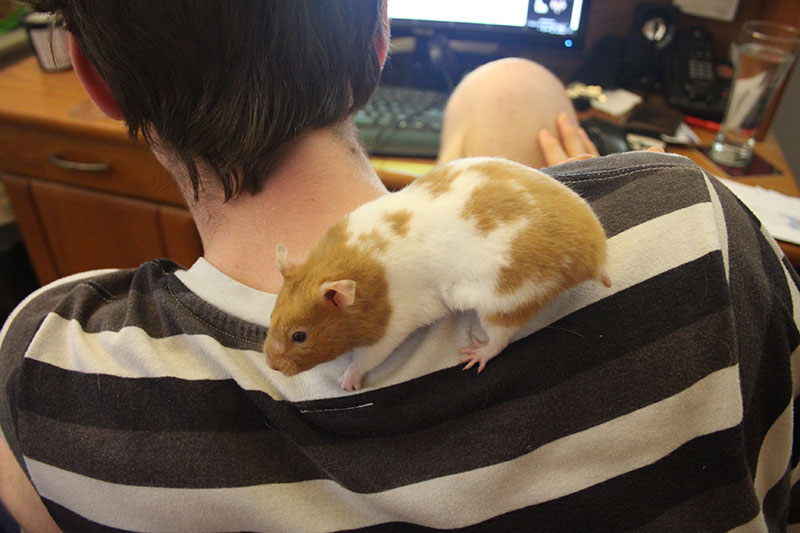 Hamsters are fairly quiet during the day, as they are nocturnal creatures. This means that hamsters tend to make more noise at night, especially if they are exercising on a loud hamster wheel.

That being said, the bigger the enclosure, the more space the hamster has to run. This will help ensure that your hamster gets enough exercise, won’t soil themselves as frequently and will ensure that they do not chew on cages out of stress.

Other things you can get to keep your hamster busy are extra pieces of tubing, wooden houses, seesaws, and bridges.

Hamsters aren’t the loudest creatures, but they do vocalize fairly frequently. Not every vocalization is going to be good though, so you may want to get to know the different types of vocalizations that your little one has to make sure you are learning to understand what they need or want.

Let’s split up what some of the vocalizations mean:

The most common scream that comes from hamsters is fear.

Since hamsters are small creatures it’s fairly easy for them to get scared. If they are scared they will commonly stare at “their predator” while screaming.

In cases where a hamster has been abused, they will commonly scream every time they get picked up. Hamsters, similar to cats and dogs, may hold traumas for the rest of their lives. The best thing is to handle hamsters slowly and cautiously to ensure that they don’t become afraid of you.

Hamsters are very aware of who is handling them and will often scream if they are passed to a new person, especially if the person is a stranger. You can easily avoid this by socializing your hamster, especially with new people.

This usually takes form in a squeak and often happens when you give your hamster cuddles or you hand them a treat.

Happy squeaks are often paired with some adorable hamster yawning or stretches.

Your hamster may also chirp softly when they are happy. 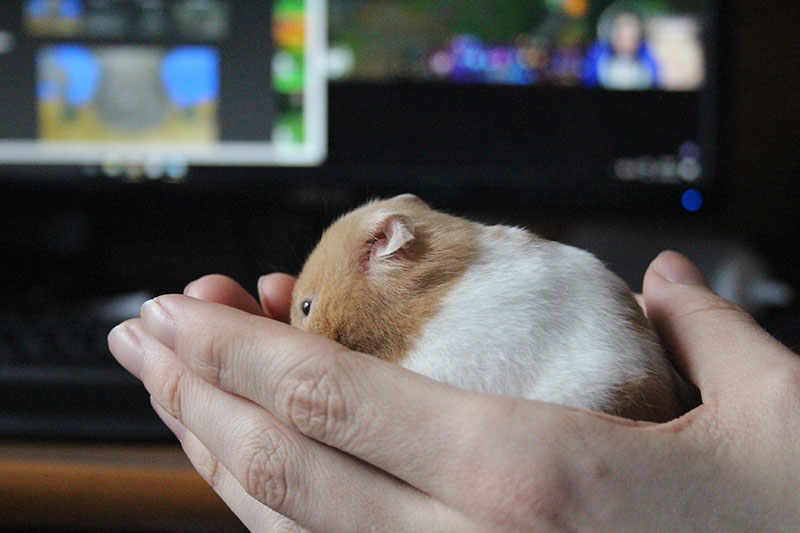 LEAVE ME ALONE/DON’T TOUCH ME! (THE PERSISTENT SQUEAKS)

Have you ever been annoyed with someone, but they keep trying to cuddle you or give you hugs? Well, hamsters hate this too! While hamsters can be cuddly pets, sometimes they’re just not in the mood.

If your hamster lets out a series of persistent squeaks, chances are you’ve gotten them upset. Make sure to put your hamster away immediately if this is the case to ensure that you don’t keep them upset.

This happens most commonly when a hamster is in a new household and is anxious about their new owners.

Take some time to socialize your little one. Place your hand into the cage every so often to allow your hamster to sniff you and get used to your scent. Over time you will notice that they squeal less. Note what is causing them to continue squealing. It may be as simple as petting your hamster in a way that they don’t like or holding them too tight.

After a while, you will begin to understand your hamster completely and there will be no more bad squeaks!

Hamsters, like cats, can be aggressive and will hiss. That being said, the majority of hamsters will usually flee and hide when they are scared.

If hamsters are forced to confront their “foe” or predator they will bare their teeth and let out a loud hiss. They will then proceed by attacking the predator and while attacking the hamster may even begin to scream.

This is a sound that you will not hear very often if at all in your household. I don’t think our cat even bothered or scared Twitch enough to cause her to do this. Then again, Beau is extremely docile and didn’t really pay any interest in Twitch.

HELP! I NEED SOMETHING!!

Just like cats and dogs, hamsters do want attention. That being said, hamsters also need to be let out of their cage every so often.

If your hamster is persistent or repeats the same pitched squeak/squeal this often means they need something.

Make sure to check to see if their food or water supply is low. Change their bedding if their cage looks messy. If the squeak or squeal continues to be persistent make sure to check your hamster’s body for any signs of injury or illness.

While hamsters aren’t known for being the quietest of pets, they aren’t the most terrible.

Twitch has never woken me up because she was being “too loud” and again that mostly has to do with the fact that we have a good hamster wheel and a lot of space for her to run around.

Squeeks and screams tend to be a bit louder, however, there are very few and far between making it no concern to provisioning pet parents. 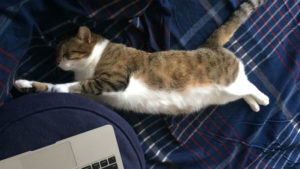