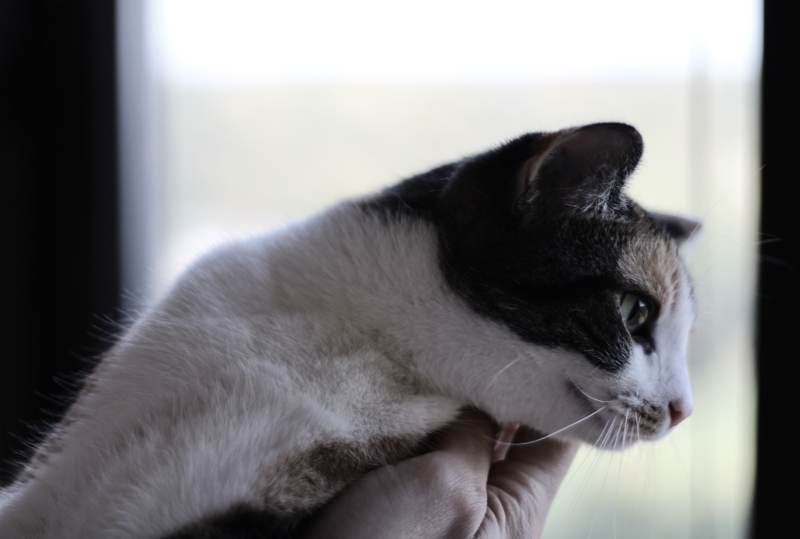 Have you ever had your cat come to beg you for more food, even though their food bowl still has food? Has your cat only eaten the center of their food and is there still a ring of food around the rim of the bowl?

I grew up in a Tupperware home, so all of my lunches were packed in Tupperware. My mom would always keep about a week of leftovers in Tupperwares, and still, our cupboards were filled with Tupperware.

Because of the surplus of Tupperware, whenever we needed to feed one of our cats out of something that wasn’t a feeder we would most likely choose to feed them out of a Tupperware.

At first, we were oblivious to the issues with using plastic bowls and containers as feeders. Luckily, we didn’t have to deal with any issues such as acne or allergies, but we did run into a whole different issue when we still fed our cats out of Tupperware.

It first started with our youngest cat, Kalista. When we first adopted her we didn’t have any extra pet-specific bowls for her to eat out of, because we were going to use some of Beau’s old puzzle feeders.

Since Kalista and Beau refuse to be separated and feeder toys are not ideal for two cats sharing the same space we moved on to using Tupperware again.

We noticed that Kalista would happily eat out of the larger containers, however, whenever we put kibble in the smaller container she would always only eat the center of her food. Curious, as to maybe she wasn’t seeing the kibble, we tried the Tupperware with Beau to see if he would do the same, but no… he left the Tupperware spotless!

WHAT IS WHISKER FATIGUE & WHY DOES IT HAPPEN?

Cat’s whiskers are thick pieces of hair that are connected to the area above the eyes, your cat’s cheeks, chins, and even the back of their front legs.

Whisker fatigue commonly affects the cat’s face, in particular, the cheeks. This is due to the overstimulation and/or pressure placed on the cat’s whiskers while eating.

A cat’s whiskers are meant to be tools for collecting information as they are connected to a series of sensory collecting nerves. This is how cats are able to tell whether or not they are going to fit into a small space and why you should be nervous if your cat is losing a good amount of whiskers.

No, whisker fatigue is not believed to be painful, although it can be extremely uncomfortable.

Aggressive acting out around other pets during feeding time

Continous whining or meowing even though the food bowl has food

Shaking after taking a few bites of food

HOW DO I AVOID WHISKER FATIGUE?

Whisker fatigue can often be avoided simply by changing the food bowl you feed your cat out of.

Shallow bowls or bowls that don’t have brims are the most ideal. If you do get a bowl with a brim, make sure that it is either extremely shallow or has a small incline to make it easy to eat from. Think “saucer” instead of a bowl.

WHAT ARE THE BEST BOWLS TO REDUCE WHISKER FATIGUE?

DO ALL VETS BELIEVE IN WHISKER FATIGUE?

Surprisingly, no. Whisker fatigue is a condition that many vets don’t agree on. The reason being: some vets believe that this overstimulation is not a problem for cats or that they don’t mind when it happens.

Now, though this may be true, there is evidence that some cats are very picky about their eating situations because they dislike the sensations caused by their whiskers being overly stimulated.

This is why one bowl doesn’t bother Beau at all, though Kalista gets frustrated when using it and has even refused to eat because no other option was provided.

WILL WHISKER FATIGUE EVER HARM A CAT?

No, whisker fatigue has not been known to ever harm a cat, other than in the moment discomfort.

Whisker fatigue should not cause whiskers to fall out, though it is important to know that whiskers naturally fall out.

At the end of the day, whether or not you believe in whisker fatigue, the truth is the fact that each individual cat will have preferences. Some cats won’t mind their whiskers being bent by the side of bowls while others may refuse to eat altogether if provided with a bowl that they dislike.

in general, cats don’t need bowls to eat from and do just fine eating with plates. The main concern with feeding your cat from a plate is them spilling the food everywhere, or not being able to easily get the food because there’s no way to push the food into their mouths (though the latter is usually not a concern.)

If you have a feeling that your cat is experiencing stress or whisker tension from the bowl you’ve chosen to feed them out of it is highly recommended that you change the bowl to a flat plate or to a bowl that isn’t as deep. This will help alleviate any of the stress or overstimulation your cat may be experiencing and is quite a small price for the happiness of your cat.

While whisker fatigue is not a serious condition, disease or ailment, it should still be dealt with just to make sure that your cat is comfortable. This is especially true if you have a cat who refuses to eat on a regular occasion and for cats who get upset or stressed easily.

There should never be a moment where whisker fatigue must be treated by a vet, however, if your cat is showing any of the symptoms of whisker fatigue and the bowl isn’t to blame make sure to take your cat to the vet. Unfortunately, like many other conditions, whisker fatigue does share a number of symptoms to other underlying ailments.

In general, it’s also never a bad thing to have too many extra food bowls or dishes, especially because have been known to get picky out of the blue. I know Kalista was doing really well with eating for over a year, and only two weeks ago she started giving us troubles again!

So pet parents, I’m curious, have any of your cats experienced whisker fatigue before? What did you do to resolve it? Do you have a favourite bowl or feeder you use with your cats? Let me know in the comments below!