Sorry about the radio silence these past few days… well, this past week! I couldn’t even remember the last time I wrote because we were too busy with moving and we didn’t have internet for about 5 days. So, I’m going to take this post fairly easy and ease myself back into the daily posting, but here’s what’s going on…

As you already know, we currently have four animals living in our household. We have Beau, Kalista, Blub and Gary. We noticed with the addition of Kalista and Gary that our place may be… too small. The main issue was, it was hard to separate all of the animals if one of them was throwing a temper tantrum or bothering the other ones (specifically Kalista and her kitten antics.) So, as soon as we noticed that we decided it was time to find a new place.

So far, we’re enjoying the new space. Although it’s going to take a lot of work to fix it up and make it feel like a home. (I’ll cover that stuff on my personal blog later this week, if not next week.) With moving tends to come some hard times with animals, so here are some of the difficulties we’re currently facing: 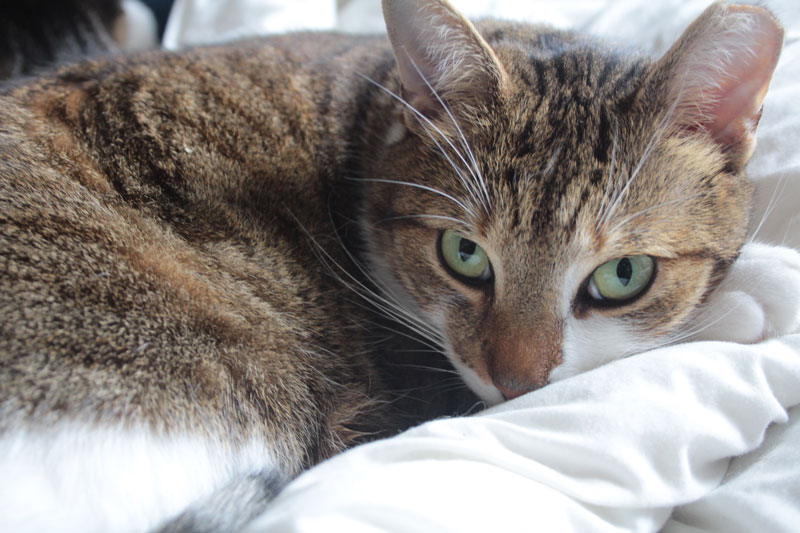 Now, I personally don’t mind this. I actually prefer our place to be hotter than colder, but it’s definitely something Gary minds. Gary needs to be kept in a temperature that is 21°C or less. Since Toronto is currently between 25°C-30°C, Gary hasn’t been the happiest camper.

We’ve got one of our AC units to work fairly well, but it’s on full blast and his cage is still about 22°C, which isn’t the worst… but it’s still not ideal (especially because the AC shouldn’t have to be that high for the room to still be that warm.)

Gary isn’t adjusting that well here either. He’s hardly eating and isn’t drinking as much as he usually does. He’s also sitting at the front of his cage most of the day, so I’m feeling fairly concerned. Now, this is probably just me being an overly anxious pet parent, but I don’t want him to be so uncomfortable he starves himself. Today he ate more than yesterday, so at least there is progress.

He did get extremely agitated when we took him out of his cage to transport him. He screamed/yelped for about 15 consecutive minutes, which made me very unhappy. It sounded like he was starting to lose his voice after a while, but transporting him in a carrier was our best option since we don’t have a van/truck for his cage. (we had to lie the cage down in my parent’s car which would have been very unsafe for him to be in.)

I just hope he doesn’t take too long to adjust. I’ve been making sure to do lots of reading about how moving affects Chinchillas and we even made sure to keep him at our old place as long as we could, but I’m super nervous that we may have to rehome him if he doesn’t fully adjust or if we can’t get the temperature low enough. We have someone coming in to look at our AC units later this week, so we just have to cross our fingers and wait it out. If for whatever reason we can’t afford to fix the units or Gary just doesn’t adjust properly we may be able to rehome him to my parents (since their home is much quieter and they have a working AC), but let’s hope we don’t have to go that far since a big reason we moved was to benefit him.

We love the little furball, we just want to make sure we’re doing what’s best for him.

It’s weird, Beau has taken a million steps back. He’s refusing to eat wet food in this place. Now, I know it’s common for cats not to eat for the first few days in a new place, but that’s the thing… he’s scarfing down kibble like it’s no one’s business.

What makes it most weird is the fact that he doesn’t show any interest in Kalista’s food, even though he would normally go for it much faster than his own food.

While he has always been a cat who doesn’t like to drink water, he’s not drinking any water at all… and I’m wondering if that’s the problem.

One of the first things we noticed when we started living here is that the water is different. All of the water we’ve had so far has been hard water, while this apartment has soft water. The reason I think the water may be the issue is that it’s known that cats can be picky about their water source. It’s actually a bit reason why folks don’t like water additives or why water additives sometimes have flavours to them like chicken. We’ve actually never had a problem with water additives before (we tried Slurp’n Fresh for a while.)

I’m actually going to run to the pet store tomorrow to grab some Fruitables Broth to see if it will help, but for now, it’s been a bit of syringe feeding and making sure Beau is getting accustomed to our new place.

We May Have Mould

We’re not 100% sure with this yet, but we have a feeling we have mould. I grew up in a bedroom that was right next to two large glass doors so my room had mould in the winter sometimes. Every morning I would wake up stuffy and couldn’t breathe and it’s happening a lot here. Our floorboards also have a blackish colour to them which looks similar to the mould that would grow in my childhood home, so I have a very strong feeling this place is not properly ventilated. It should be a quick fix, and we’re looking into what dehumidifier to get. I just hope we’re wrong because I don’t want any of us getting sick, but we are most likely going to hire a painter who will be able to tell (especially because a number of walls are broken/paint is chipping everywhere.

Our Windows Don’t Have Screens

Luckily this is going to change soon since it’s apparently becoming some sort of condo standard or law that all windows must have screens, but as it is right now… we can’t have windows open unless we’re in that room. This isn’t the biggest deal, but it does mean that some rooms get extremely hot because we’re not in them. Kalista has tried to jump for the windows a couple times, which isn’t surprising for an energetic and crazy cat like her. It also means lots of bugs fly through our window every night, and while this is a bother for us humans, the cats have been getting endless hours of entertainment.

Now with every move, there are some really big benefits that take place… like:

Kalista is Sleeping with Us

I guess it only took a move for Kalista to sleep with us in our old place. Her favourite spot was above our bookshelf in her carrier, but since moving here she’s been sleeping with us in bed. Actually, some nights she’s in bed with me long before Beau gets in. The other morning I freaked out because I thought someone grabbed my leg since there was less weight than usual. (Yes, Beau, I’m calling you tubby again.) Which leads me to the next thing that’s changed:

Kalista and Beau are Officially Inseparable

These two have become true besties. They sleep together, chase bugs together, clean each other, play with each other and there have been no fights so far (although I’m expecting more of those in the future!) Whenever come back from being out they’re always on the couch cuddled up with each other ready to say hello to us! These guys are honestly so adorable and I’m glad that they’ve grown to love each other.

We Have SO MUCH SPACE!

This place is about double the space of the other place. It means that Kalista has enough space to run around and be a kitten and it means that Gary gets his own space in my hubby’s office, which is closed off to the cats most of the day. We currently have 4 rooms (one being a sunroom), a living room and two washrooms. Which is SO MUCH SPACE! But we’re definitely not going to be moving anytime soon, so even if our family continues to grow, we should be fine!

Other than that, I don’t think I have any more updates for you. I will take some pictures this week and update you with those, and again if you’re interested in a full tour of the new place/see what kind of renovations we’re going to be doing subscribe to my personal blog! 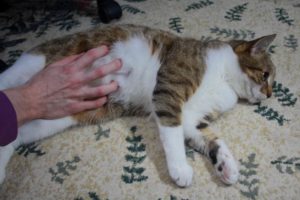