I have to be honest in saying that every so often I get a thrill from seeing my cats be surprised or scared. Now, that’s not to say that I scare my cats purposefully, however, on the odd happenstance where a bug freaks them out or they get scared by their tail, I have to admit I giggle.

It’s interesting to figure out what makes your cats tick or what gets them spooked, especially when the triggers seem to be abnormal. Kalista, for example, is deeply afraid of knocking that comes from the front door, though she loves running into the hallway and doesn’t seem to mind knocking if it’s coming from elsewhere in the apartment.

Beau, on the other hand, tends to be more afraid of sharp movements, loud noises or being cornered. His biggest fears include the fire alarm, which I don’t blame him for and any construction happening in the building.

In general, most cats are hyper-aware or wary of new people, objects or even new sounds. This is why you will often catch your cat walking slowly towards anything that is new to them and may even bat at anything new suspectingly.

Stevie, the cat that I’m currently babysitting seems to be the cat who experiences frightfulness the most. Although a big part of Stevie’s frightfulness could be due to the fact that I’m so new to his life, it seems like a lot of it is an innate nature.

Stevie is terrified of very small things, such as when bags move, my DSLR camera, sneezing and similar to Beau, sharp movements.

Similar to Stevie, many cats have been known to be afraid of odd small objects or even harmless fruits and vegetables. One of these fruits is the cucumber.

I’m sure by now everyone has seen the videos of cats being terrified by cucumbers, but it’s time we discuss why it is that this tasty veggie has such a bad rap with kitties all over the world. 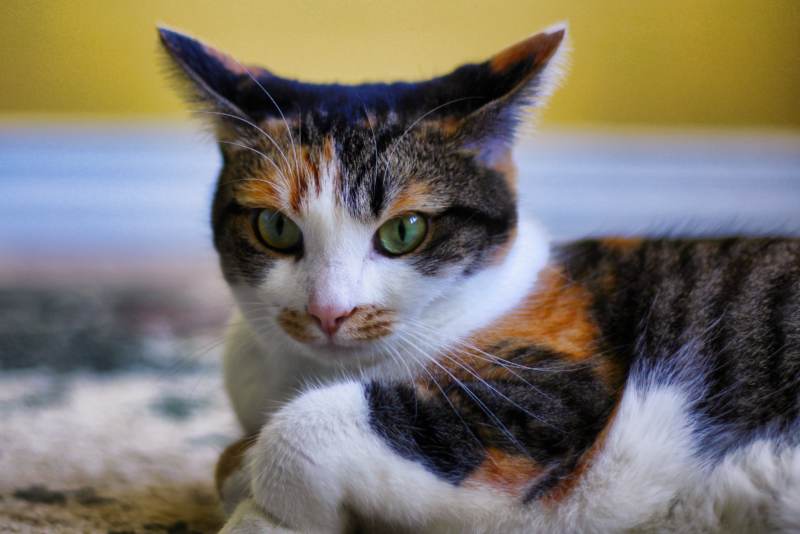 CATS ARE ALWAYS ON GUARD

Have you ever noticed your cat being suspicious or wary when you walk behind them? Both Beau and Kalista walk slowly with their ears perked up when we walk slowly behind them.

Although both Beau and Kalista feel safe in our apartment, which wasn’t always the case, they are still always on guard because… well they’re cats!

Fun Fact: Did you know that cats spend the majority of their sleep actually awake so the can run if in danger?

Cats have a built-in instinct to always be aware of their surroundings so they can run away from their predators. It’s why your cat may flinch when you try to pet them out of nowhere, especially if they are walking slowly,

Cats are extremely cautious, it’s part of what makes them such cute creatures. Cats are especially wary when it comes to food and water. You may notice your cat tuck their tail between their legs as they begin to get ready to eat. This is another instinct cats have when it comes to protecting themselves.

This is why placing a cucumber behind them is so effective. Since it’s a fairly large vegetable being placed so close to the cat, it may be a danger.

CATS ARE SUSPECT OF EVERYTHING AROUND THEM

Ever get a new toy for your cat and watch them back up from it then begin trying to move forward while sniffing. This is another way cats make sure that something is okay to eat or play with.

If a cat suspects danger they will either attack or flee and in most cases, they will flea unless attacked.

SO WHAT DO CATS SEE WHEN THEY SEE A CUCUMBER?

Well, let’s preface it with this: have you ever looked behind you and thought you saw a ghost? Or a man behind you? Or even an alien? Similar to you, cats see many things in their peripherals and think that they are something else.

So, what do cucumbers look like to cats? Dr. Roger Mugford, who is an animal behaviour specialist believes that cats get scared of cucumbers merely because they are something that wasn’t there before.

Some animal behaviourists like Jill Goldman believe that cats see cucumbers as snakes and thus naturally trigger their “startle response.” Jill believes that this is due to a cucumber’s long, green, slender appearance.

With a startle response, a cat will often try to get out of there as quickly as possible and then reassess from a distance

This makes sense because historically cats have been prey to snakes in the wild.

Cats are genetically hard-wired through instinct to avoid snakes

It can be easy to forget that all animals have certain built-in instincts that include certain animals and sounds to be wary of. This is why sounds like balloons being slowly deflated, hissing or even a canister of air being used terrify cats.

This is also why birds are interested in birds chirping or fish swimming from the get-go, even before they’ve seen them.

WHEN IS SCARING YOUR CAT TOO MUCH?

While seeing your cat in shock can be funny, it’s a good idea to try to refrain from scaring your cat.

It’s important that you are building a relationship of trust with your cat. Regular attempts to scare your cat may lead to your cat avoiding you or feeling unsafe in your home. This is especially true of scares that cause a cat to jump and/or yelp.

Not only do these scares accelerate a cat’s heart rate, but they also trigger your cat’s startle reflexes which may cause them to defecate or soil themselves.

If you take notice of your cat is afraid of a certain thing, such as the use of a blender or vacuum cleaner, it is advised that you remove your cat from the room that the device in question is being used in. This will help reduce the chance of your cat developing a fear of certain rooms or areas of the home.

It is also important that you do not scare your cat due to the fact that scaring them can lead to them injuring themselves. Though cats are known to land on their feet, this doesn’t mean that they won’t land on some other object or will not break a bone.

ARE CATS SCARED OF ANY OTHER FRUITS OR VEGETABLES?

Yes, they are, especially when the fruit or vegetable is behind the cat. This is why animal behaviouralists are unsure whether or not cats are actually afraid of the cucumber itself.

There are a number of videos documenting cats being afraid of bananas, apples, peaches and other large fruits/veggies.

One thing is for sure, whether or not your cat sees a cucumber as a snake or not, oftentimes cats view cucumbers as threats.

Whether your cat is just afraid of the cucumber because it was placed closely behind them or if they believed it was a snake, this type of behaviour should be avoided.

Although a good scare may be funny when it happens by mistake, a cat should never be scared on purpose. Consistent scaring will cause the cat to become suspicious of you and/or will make them feel unsafe in the home.

Stressed cats may also develop other behavioural problems which can ultimately lead to longterm health problems.

So, pet parents, I’m curious about the other things your cats are afraid of? Is there a particular sound or object in your house they dislike? Let me know in the comments below! 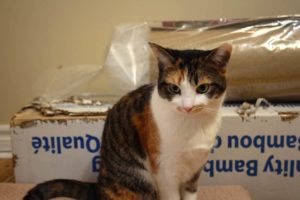