I’ll admit, this is quite an odd topic to be brought up on our pet blog, but many of us have cats who seem to constantly have mood swings.

Our cat Kalista loves to get petted. Sometimes she will beg for attention until we start petting her, but shortly after she will bite and then lick us. Beau is very similar, though oftentimes Beau will claw at us out of seemingly nowhere.

Behaviours like this are exhibited by cats quite frequently, but does that mean that there is something wrong with them?

I’m sure many of you have heard of the studies that say that there is a relation between owning a cat and developing Schizophrenia. Most famously is a study published in the journal “Schizophrenia Research” which claimed that “Cat ownership in childhood has now been reported in three studies to be significantly more common in families in which the child is later diagnosed with schizophrenia or another serious mental illness.” So is this something that we cat lovers should be worried about or is this all hype?

Well, with every article that claims that Schizophrenia or other mental illnesses develop because of cats, hundreds of other journals and studies get published proving that cats are actually a benefit to have in our households. 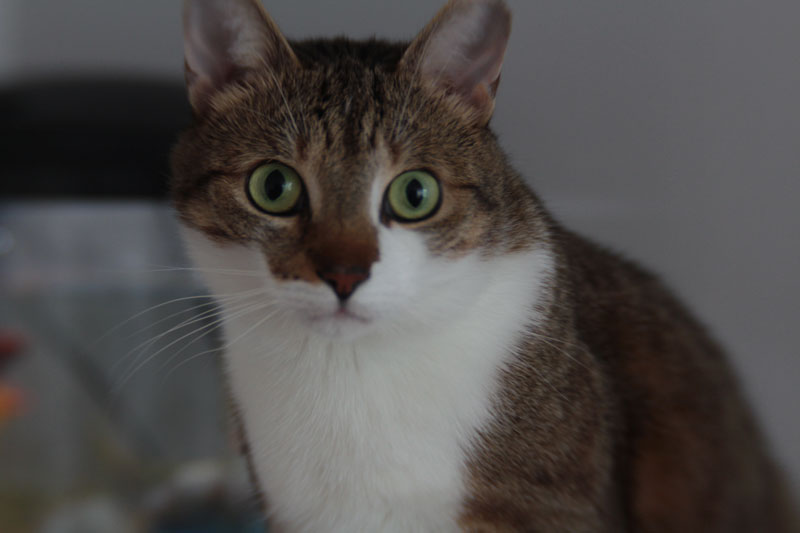 Human schizophrenia is a mental illness that affects the way that an individual thinks, manages their emotions and often impairs a person’s ability to function to the best of their ability when not treated.

Psychosis is often a symptom of schizophrenia which can often lead to hallucinations, delusions or even disorganized speech and behaviour. Note that schizophrenia is an extremely complicated mental illness and t

It is important to understand the severity of the human version of schizophrenia, as the cat version is extremely different.

As mentioned, cats do not experience the same form of schizophrenia as we do as humans.

Feline Schizophrenia which is known as Feline Hyperesthesia is when a cat seems to have character changes, seems to be having hallucinations, seems possessed, acts manic or seems “schizophrenic.”

That being said, although symptoms can seem similar to the human condition, they are not considered to be the same.

SYMPTOMS AND TRAITS OF FHS

– Experience sensitivity to touch on the spine

– Hallucinations or following of movements that aren’t actually there

– A fixation with their tail leading to tail swishing, tail chasing or vicious attacks to their tail

– Sudden move swings (such as cuddly to aggressive)

Unfortunately, there are no known causes for FHS. Though this is true, vets have a few assumptions as to what causes FHS.

1. A Manic Tendency Caused by Stress

Stress affects more cats than you can imagine. Not only do cats experience stress from loud noises, but cats also can pick up on animals in nearby apartments and/or households.

If a cat is put under an extreme amount of stress it is believed that they will exhibit manic episodes. This is most common in oriental cats, although there hasn’t been any concrete proof that their “manic episodes” are related to stress.

That being said, many cats who are chronically stressed are offered a product called Feliway. Feliway releases a pheromone into the air that is meant to replicate the same pheromone that a mother produces when she is nursing. Results have varied from cat to cat, so it is recommended to speak to your vet before offering them the product.

2. Electrical Activity in Areas of the Brain That Control Emotions

The brain is a complicated series of wires and circuits that are quite sensitive to electrical activity.

When a brain experiences electrical activity in the part of the brain that controls their emotions cats have been known to display odd grooming habits, predatory behaviour or have even been known to experience seizures.

If ever you notice your cat experiencing a seizure please call the vet immediately. The vet will let you know whether or not you should bring the cat in, however, seizures are often a sign that something is going on with your cat’s brain.

3. FHS May Be a Form of Feline Obsessive-Compulsive Disorder (OCD)

OCD is a chronic disorder where humans have reoccurring obsessions or compulsions that are uncontrollable.

Cats who show signs of FHS are often given anti-obsessional medications which have seen some positive responses. This has helped a number of cats stop overgrooming and thus have reduced hair loss.

There is also a hypothesis that they are similar due to the fact that many humans with OCD are prone to seizures.

4. Lesions on the Spine

A number of cats who have been diagnosed with FHS have been found with pathological lesions in the muscles along their spine. It is easy to assume that these lesions are the cause for their irritation, sensitivity and/or pain.

HOW IS FHS DIAGNOSED

There are actually no confirmed tests for this “disease.”

Vets will usually go through the list of symptoms and will try to confirm that they aren’t symptoms of other ailments or mental problems.

Vets must be extra careful while diagnosing FHS and will go through the complete medical history of your cat. This will include you providing your vet with a list of your cat’s daily activities and behaviour. So, it’s always a good idea to keep a journal handy for recording what your cat does during the day and when they exhibit symptoms most frequently.

The vet will also perform a very thorough physical exam checking for things like lesions. Other tests include blood tests, a test to confirm that the thyroid hormone level is safe and a full chemical profile.

Because FHS is a disease that isn’t easily diagnosed/confirmed there are a number of misdiagnoses.

In cases of misdiagnosis, there is often another condition that the cat is experiencing which is causing the symptoms in question. The most common misdiagnoses are nutritional deficits, severe allergies, lead poisoning, brain traumas, brain tumours, brain infections, and hyperthyroidism.

– Play with your cat more frequently and longer

– Consider getting yourself another cat

– Train the cat to perform a new trick every so often

– If you have cats that are constantly fighting, make sure to address the fights

– Get them toys they can take their aggression out on

– Make multiple levels for your cats to run around on

– Get a fish tank or birds for them to watch (just make sure that they do not try to attack the animals.)

– Get a challenging feeder for them

Unfortunately, at this point vets are uncertain whether or not FHS is actually a real condition.

It is clear that something is affecting a number of cats, but a lot of the symptoms seem to be  normal for many cats (ie. the mood swings, large pupils, vocalizations when bored, and a sudden burst of energy)

Again, vets need to ensure that they are extremely careful when diagnosing a cat with FHS as it shares extremely similar symptoms of other diseases cats face.

We can’t disregard the research that has been put into FHS, but I am interested to know if any of this ever becomes solid evidence versus theories.

Let me know what you think, pet parents! Do any of your kitties have any signs of FHS? Have any of your cats been diagnosed with it? What did you do and did it help?