Most of you already know that Beau underwent a Double Cystotomy and Perineal Urethrostomy in late 2017.

Since writing about Beau’s recovery, I’ve received dozens of questions from readers about my opinions on aftercare for these operations. One of the most popular I get is “can you use clumping litter after the Perineal Urethrostomy?”

Trust me, I know it really sucks when you have to change up your litter, especially if you’re as in love with your litter as we are, but the sad truth is, you’re going to have to switch if you want to make sure that there are no issues with your little one’s recovery. You may also have a finicky cat who “will not take to the new litter.” Luckily, we had no issues getting Beau to use the non-clumping litter and he actually started using empty litter boxes (which is actually the habit we had to train him out of.) 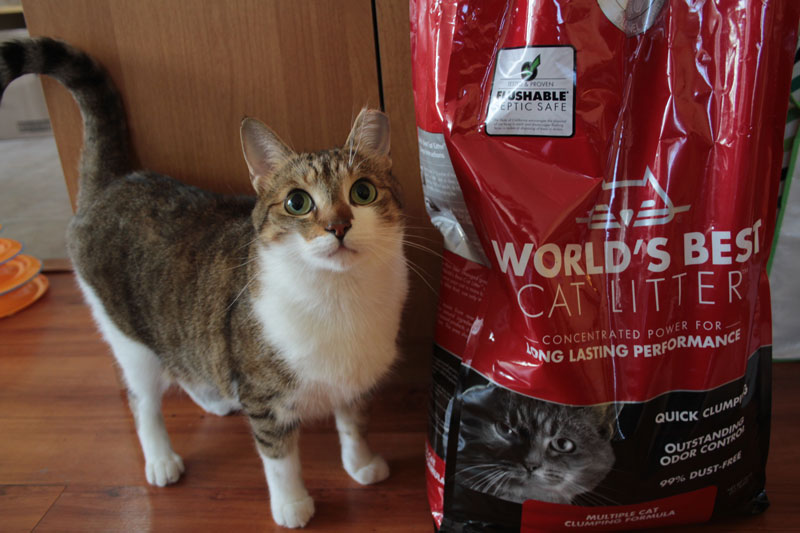 Surgery = The Cone of Shame = Your Cat Can’t Clean Themselves

Since your cat will be peeing more frequently from a larger opening there are higher chances of them peeing on themselves. If any urine gets on their legs there is a large chance the litter will stick to their fur. As you can guess, this is an issue since your cat will be unable to lick the litter off their leg, causing problems such as urine burns.

Now, this isn’t going to be a problem for those of you who are staying with your cat 24/7. For those of you who are lucky, whip out the waterless shampoo and clean them. However, if you who aren’t home I can assure you that spending some extra money on some good non-clumping litter will save you some grief. Non-Clumping Litter makes sure to absorb all of the urine and makes sure that there is no residue left on your little one’s paws.

You may be saying, “Well Johnny, my litter doesn’t have any residue and never gets stuck to my kitty’s paws or legs!” I wish it was that simple. Even after searching for years for the best litter, there will always still be a bit of dust that will end up on your kitty. It’s a lot easier to tell when you have a cat with white legs. We’ve tried the following litters, and they all still have a bit of dust: World’s Best Cat Litter (Multi-Cat), World’s Best Cat Litter (Single Cat), and BLUE Naturally Fresh Multi-Cat Natural Cat Litter (Alpine Meadow). I’ve also compiled a list of clumping and non-clumping litter.

They Are Relearning How to Pee

Over the next few weeks, you will notice that your cat may not be urinating the way they used to. I know Beau was too weak to stand up for the first few days, but after his operation, he sometimes sits far too close to the litter. On bad days Beau gets litter stuck in his incision site. That being the case, if they do not pee the litter/dust out immediately, or try to clean themselves shortly after you may end up with an infection. Although, take note: after the surgery, it is much easier to deal with Urinary Tract Infections as it’s usually just a twice a day pill for a few days. You can also take some precautions when dealing with UTIs, which reminds me to update that page with some cool new things I’ve learned!

For those of you who have never had a cat undergo a PU Surgery, you’re actually warned about how often cats will get UTIs after this surgery. It’s actually one of the biggest factors of why we didn’t want to get the surgery at first for Beau. We kept thinking to ourselves… well if this is going to cause him to constantly be uncomfortable or in pain… why are we doing this? But our vet told us that if you take the proper precautions you will be able to prevent all UTIs unless there’s something that irritated the incision point (like litter, or other debris.) Urinary Tract Infections can also be caused by overcleaning the incision site causing it to become raw/inflamed. So, it’s a bit of a double-edged sword.

Have you ever had a cat lay in their litter?

Cats are such an odd creature. Sometimes when they’re stressed out or angry because of a move they sit or lay in their littler. For some reason that is their space where they feel most comfortable. Not in your lap. Not in the comfy bed. No. They want to sit and be angry in the litter. Well… honestly, sometimes this happens when your cat is healing.

This can be problematic especially because the Double Cystotomy surgery is located on the underside of your cat meaning if your cat hides in litter boxes clumping litter will definitely get stuck in the stitches/sutures. So if this sounds familiar, your first priority is going to be to change that litter to non-clumping and you need to find a way to calm down your kitty.

Some people use products such as Feliway, which is a product vet always recommend, although it hasn’t seemed to work on Beau. The emergency vet kept telling us that it kept Beau calm and that he did really well with it, although Beau is a pretty calm cat in general. Honestly, I’ve had a better response with playing music for my cat than using Feliway, but in general, every cat is different. Honestly, some cats just love it or feel comfortable when you leave a TV on when you’re not home or like it if you have a toy with food in it that they can kick around. Again, cats are so picky or specific sometimes! I guess because I play a lot of music in my house, the cats associate the music with me maybe? It works, so I’m really happy about it!

Either way, back to the point. Make sure to get non-clumping litter so that if they ever have a moment where they are too stressed to handle the world… they’re going to be safe from getting their stitches and sutures infected.

So, Johnny, would you suggest I use non-clumping for the rest of their life?

I would be a hypocrite to say yes, but I will say that using non-clumping made my life a lot easier. (In regards to worrying about my cat’s health). It’s true that Non-Clumping isn’t the easiest to clean up (unless you choose to throw out the whole litter daily), and it’s also true that poops tend to smell really bad, but on the other hand, it did make sure that Beau didn’t have issues with a dirty body. We also set up cardboard litter boxes that Beau didn’t have to climb up in and put garbage bags underneath so you could just throw the whole thing out. This made sure that when he peed you could see what colour it was. (This is very important for owners to take note of after the surgery as they may pee blood (showing signs of a post-op complication.) I mean, you can see blood fairly well when it comes to using light coloured litters like World’s Best Cat Litter.

Either way, we switched back to clumping litter about 2 months after Beau’s operation. When Beau had returned “back to normal” and could properly clean himself we made this choice because Beau’s poops smelled way too strong… Urinary CD doesn’t usually help make the best smelling poops…

So pet parents, have I changed your mind about sticking to regular litter? It’s hard not to change after you’ve just spent so much time trying to make sure your little one feels better. Why risk it all just so you don’t have to change your litter? At the end of the day, there are so many different types of non-clumping litters you can try. So if your cat doesn’t like one, you’re bound to find another one that is just as safe! How about you? Which non-clumping litters have you tried? Do you have any advice for folks who don’t want to, or can’t seem to get their cats to use non-clumping after surgery? 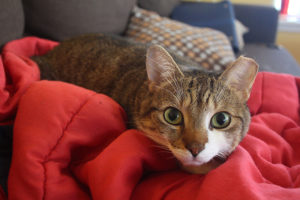