Since adopting our youngest cat, Kalista, no cardboard box that enters our apartment is safe.

For example, we’ve had a box of floorboards in our living room since we moved in and Kalista has chipped at the box slowly finally exposing what the planks look like. I swear, if we didn’t open our packages immediately, she would open them for us like a kid on Christmas morning.

While it can be frustrating coming home to a ripped up box or waking up to little pieces of cardboard scattered across the apartment, chewing and ripping cardboard is actually a fairly common habit for cats to have.

That being said, let’s dive into the reasons why your cat may have this destructive behaviour and what it means! 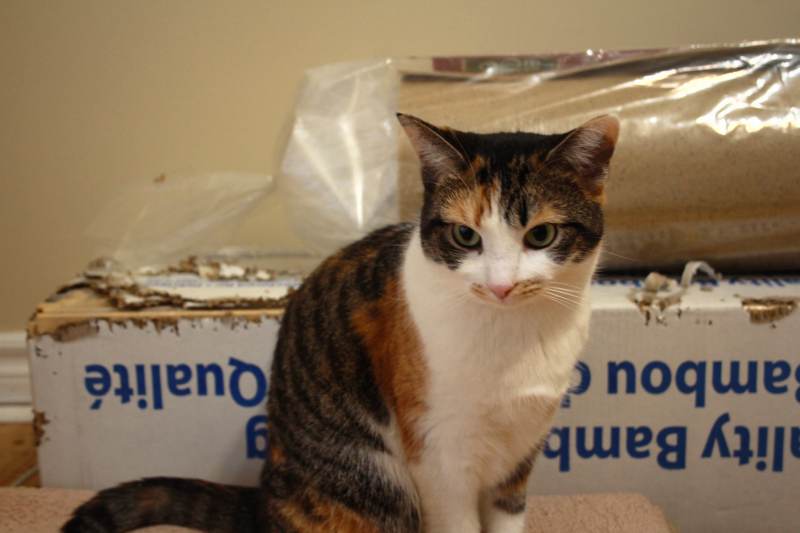 Some cats like our youngest, Kalista, are picky eaters and will refuse to eat if they aren’t given the food that they want or the exact batch or consistency that they are used to. Kalista is one of those weird cats who will start chewing on cardboard anytime she is hungry but doesn’t want to eat the food that we give her.

Truthfully, this is one of the most annoying behavioural traits Kalista has since we know she’s hungry and we are trying to give her food, but she won’t accept it. That also said it comes in very handy because it gives us a clue of whether or not Kalista has eaten enough from her previous meal, as she’s a cat who likes to walk away from her meals even if she is still hungry. We assume this is both tied to her pickiness as well as her extreme curiosity.

MY GUMS ARE REALLY SORE

Many cats begin developing dental problems by the age of 3, including issues like gingivitis. Cats may choose to chew on soft objects such as cardboard as a way to soothe their gums from the pain and inflammation caused by these dental issues.

Dental problems can be avoided by ensuring that your cat has the proper toys to chew on, their teeth are regularly brushed and they get regular cleanings/dental checkups by the vet.

Dental problems are more common for cats who are on an all wet food diet, though it is also a myth that kibble cleans a cat’s teeth. Kibble, in fact, can help reduce tartar and plaque if they are fed kibble that is large enough in size. This is the thought behind dental treats such as greenies, however, it’s important to ensure that your cat is actually chewing on these large pieces of kibble/dental treats rather than inhaling them as many cats do.

Similar to dental disease, dental toys will be an asset, especially ones you can put into the freezer. My favourite is the Petstages Dental Chew Wheel since it has little nubs around it to massage out your cat’s gums.

I’M BORED AND I DON’T HAVE ENOUGH TOYS!!!

It’s in a cat’s primal instincts to rip apart and play with their prey, so it’s for that reason that many vets believe that cats tear up cardboard boxes.

Cats may choose to shred cardboard boxes with their nails or teeth as a form of relaxation and play when they have a lot of energy.

If you have a cat like this you may want to look into getting cardboard cat scratchers or even into scratchers such as the Kong Wrangler. If you continue to allow your cat to chew and rip up cardboard boxes (which isn’t an issue) make sure to monitor them to ensure that they are not digesting any of the cardboard as it may cause an obstruction.

Boredom chewing can also be a sign that your cat has Pica, however, Pica usually also includes chewing on garbage, plastics and other objects. If your cat is tearing up more than just cardboard I would definitely recommend reading my piece about how we got our eldest cat, Beau, to stop chewing on absolutely everything!

Pica can also be a sign that your cat has nutritional deficiencies or was weaned too early, so it is best to get your cat checked out before anything bad comes of it.

Does your cat like sitting in boxes? Do you find yourself building custom homes for them? Well, take note of where they are chewing their cardboard box.

If it seems that your cat is chewing or ripping the same pattern into the cardboard box you may actually have a designer on your hands who is actually trying to manifest their vision of comfort.

This is actually one of the least common reasons why cats chew on cardboard boxes, so consider yourself a very lucky pet parent if you have one of these special kitties.

THIS IS MY BOX, DON’T TOUCH!

Similar to behaviours like kneading or bunting/headbutting, cats may chew on cardboard boxes as a form of marking their territory.

Cats who are insecure or more commonly scared may tear up cardboard boxes more frequently than independent cats.

It is important to make sure that your cat is not suffering from anxiety or stress as those tend to snowball into other behavioural issues such as ripping out their own hair and can sometimes even cause illnesses or ailments to progress faster.

If you think your cat is experiencing anxiety or stress I recommend talking to your vet about steps you can take to help reduce the stress.

For us, we’ve scheduled our cat’s feedings as well as playtimes, we play them calming music when they show signs of being strung out and we’ve given them feeder toys to keep them busy and stimulate their minds while eating.

Some vets will recommend a product called Feliway which releases a pheromone meant to replicate a mother cat’s scent. This has proven to help calm down many cats, however, it is important to know that it does not work for all cats.

Unfortunately, Beau is a cat who was not affected by Feliway though we’ve had many friends who have solved behavioural issues with it. Again, speak to your vet about this product to see if it may be a good fit for your household.

YOU’VE UPSET ME / YOU’RE IGNORING ME

Every so often we’re not the best pet parents we can be and we get our little ones angry or upset at us. So what do our cats do? Well, sometimes cats will take out their anger on cardboard boxes, our couches or sometimes even our skin.

Similar to anxiety and stress it’s important to make sure that we are aware of what the caused of the anger or upset is to ensure we do not repeat our behaviour in hopes of appeasing our cats.

At the end of the day, it’s important to remember that we live our cat’s houses and not the other way around ;).

If your cat needs too much attention or is young, consider getting them a playmate. Now, that being said, getting your cat a playmate is not going to solve all behavioural issues, however, it will make sure that your cat has a partner to help burn off some of that extra energy they have built up inside of them.

HOW DO I STOP MY CAT FROM CHEWING CARDBOARD

When deterring a cat from a specific behaviour it is important that you do not scold your cat by yelling or hitting them. You may, however, be interested in getting yourself a deterrent spray or compressed air that makes a hissing sound. I would recommend against blow horns or other loud deterrents as they can traumatize a cat.

Alternatively, you can also train your cat with a clicker or by snapping your fingers close to them. You can also begin teaching your cat specific commands like “uh-uh” or “tsk” although you’re going to want to make sure that their deterrent word isn’t a word you commonly use or their name.

I personally prefer sounds to words just so I can make sure that I’m not freaking out my cat by mistake by using a similar sounding word to their “deterrent word.”

Though chewing and ripping up cardboard boxes is often harmless, it is a form of destruction you’re going to want to keep your eye out on. This is especially true for cats over the age of 3 who may be dealing with dental diseases.

In general, it’s a good idea to keep track or keep a log of your cat’s behaviours to see if there are any patterns and if ever you have any further questions to approach your vet with them.

So, pet parents, I’m curious how many of your cats chew on cardboard? What did the reason end up being? Let me know in the comments below! 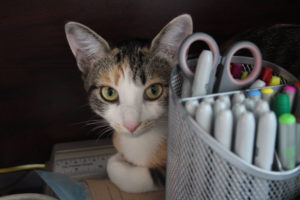 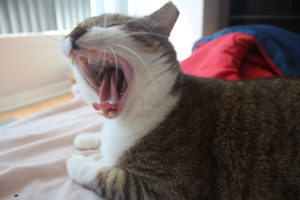