I’m still finding it extremely difficult to let go of my grief for Beau and it seems like in recent days it’s become more difficult than ever.

I don’t want to litter my blog with “poor me” stories and continual attention seeking, but I’m finding it difficult to cope most nights and the amount of disassociation I’ve been feeling with my body and life has been a bit alarming to me.

After losing Beau, I went through a number of stages of grief. I can’t say that there was a whole lot of denial of losing him as I was there for his last breaths and gutturally knew that the day we lost him was going to be his last, but I can’t say that I knew the amount of loss I was really going to feel and the amount of loss I continue to feel.

I regularly get angry at myself for not doing more, knowing in the back of my mind that I did the most I could have done for Beau and would always go to above and beyond for him, though I can’t say that “the coach” is letting me feel that.

“The coach” keeps telling me that I’m one of those bad pet parents who should have done things differently, that tells me that if I hadn’t done this or that, that Beau could have had a longer life with me, but realistically that’s not true. Beau had a bad heart, we knew that and although not at the forefront of our minds, we knew that Beau could be taken from us any day.

“The coach” keeps trying to convince me that I’m a neglectful person who should have seen more or should have known more, though he disregards the endless amount of research I did to learn about Beau’s conditions, spending hours on end reading other cats’ experiences, vet research and anything I could find to help make Beau’s life better. 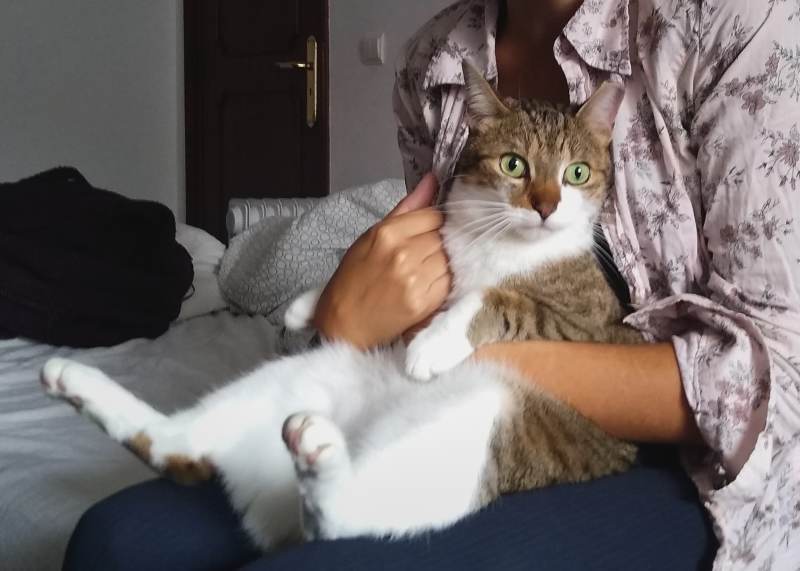 Beau would always follow me wherever I went. There were hardly any moments when Beau wasn’t with me or playing with me.

Whether it was chasing feather wands, kicking balls around the house, playing with springs, or simply being a potato and sleeping in my lap, Beau and I were inseparable any time I was home, which in the end ended up to be a damn lot of time.

Beau always let me know it was time to go to bed, he would get off my lap after working on the computer all day, would stand by the door and let out a big meow and begin walking towards my bedroom.

If I didn’t follow him, Beau would continue to sit there staring at me, swishing his tail from left to right, letting out a few more meows if too long had passed.

He’d walk me to the bathroom for me to brush my teeth and as soon as I was done we’d head to bed and he’d make his way to sleep by my side in my arm or between my legs or feet.

Beau always slept with me, there wasn’t a single night that I spent alone since adopting him. Every night when I’d feel him put his weight on me I would feel relaxed and ready for bed and even when I was restless and felt like I couldn’t sleep, the guilt of having to move and in-turn wake up Beau was too much, forcing me to actually simmer down to sleep.

Real-time intrusive thought of guilt is that I got up too early that Saturday that he died and could tell that he still wanted to sleep, but even though he wanted to sleep, he instead jumped on my lap as I logged on to start writing for my day, trying to, but being unable to properly fall asleep on my lap.

I obviously know that me “waking up too early” isn’t a real thing and that wasn’t the thing that “killed Beau,” but those are the weird and insane thoughts that I get throughout the day that when piled on feel overwhelming and stressing.

Pair that up with the fact that after a long day I still have phantom feelings of Beau jumping up onto my bed and sleeping on my legs resulting in me crying or feeling empty from the loss of my best friend. 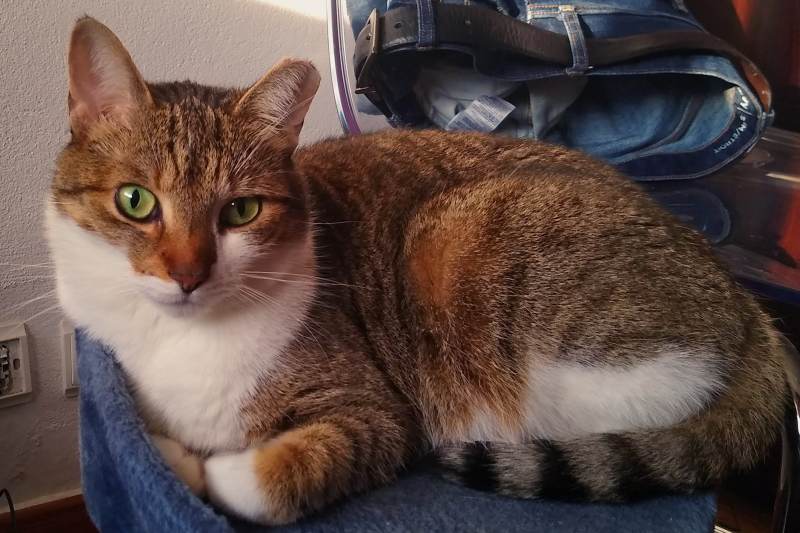 I wish that I could say that one of the other cats has “stepped up” and taken his spot, but Kalista is too temperamental and will jump to sleep on my chest, initially kneading it for a few minutes (which I admit is adorable) before she darts off for the night and starts playing.

I thought that Aramis (nicknamed Mishu) would take Beau’s spot in some way, though she’s often sleeping by my husband’s head essentially making me feel like I’m alone at night with no one who cares, which is so obviously false.

These days I somewhat feel like a shell of a human. I feel like the majority of my drive has vanished and though I continuously swamp myself in work, it somewhat feels like I have lost all ambition to continue as I don’t feel like I’m working towards anything.

It’s hard to say why, especially as I’m surrounded by family now and even by other cats, but I don’t feel the same.

Now, before I continue, I want to say that this isn’t a cry for help as what I am experiencing isn’t bringing me any invasive thoughts of ending my life or relationships, or even me “wanting to give up the cats” however, it is leaving me unable to find joy in activities that I normally love and has resulted in regular times of the day where I simply weep and become unable to get out of bed.

I’ve been finding myself becoming unattached to my surroundings, disassociating regularly from my body and quite frankly have even noticed myself emotionally recessing from my husband and siblings, which hasn’t happened in a very long time.

Somewhat I’ve noticed myself even recessing from the cats, not wanting to bond with them more and taking care of their basic needs without trying to seek attention from them, which I can’t say was true before losing Beau. I would always seek him or Kalista out for cuddles or playtime and I can’t tell if it’s me trying to “protect myself” from feeling attached to them right now or if it’s simply because I’m feeling unattached from everything in a sense.

The best way to describe it is that I’m going through a depression that overtakes my body. 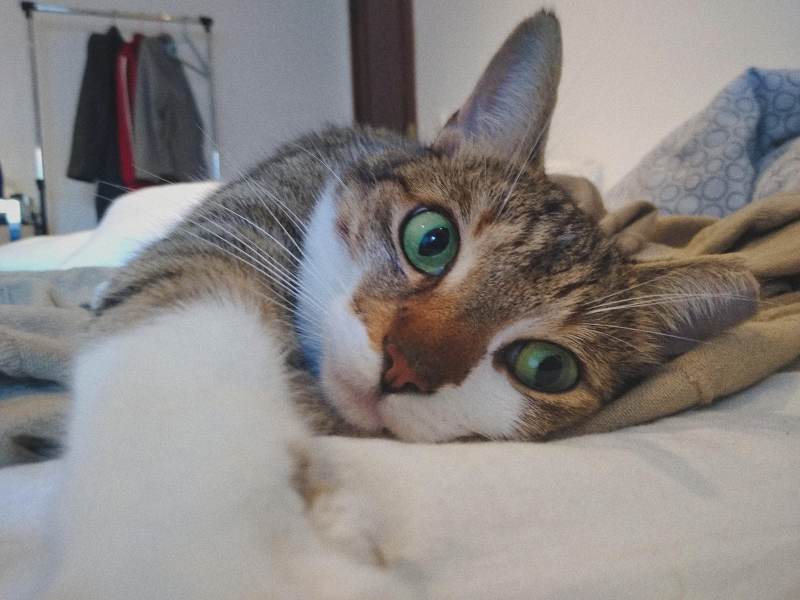 There have been a few days where I’ve had to let my husband know that I would spend the next hour or so by myself in bed upstairs, where I either stare at the ceiling emptying my brain of all the garbage that’s in it or sometimes endlessly scrolling up and down a webpage without actually having the intention of reading it.

Things got really bad for me this week, leaving me bedridden for more time than I’d like to admit and so I made the decision to take 3 days off to try to reset, intending to draw or start new video games, but my attention span feels shot and I also end up getting emotional because those were activities I used to do with Beau.

Again, he would always sit in my lap when I had a sketch book open or when I was starting to grind out a new dungeon and it’s difficult to say if my lack of ambition is simply the association with the activities and Beau or if it just stems from a general overall depression that I’m currently feeling.

Thing is, I see my sister every day. I visit her often, being that she lives virtually next door and while in a normal period of time that would help improve my disassociation, it doesn’t seem to be helping and in-fact some nights I dread (being too strong of a word, but lacking the knowledge of a better word) having her and her husband over for dinner or going over, not because I don’t want to see them, but because I feel like I don’t have the energy to do anything. I tend to go into that “third-person” hovering over you perspective, feeling robotic and forced (not by them) to emulate happiness, joy or laughter in moments that I would normally be happy or joyful, instead of having those emotions just go through me.

My sister let’s me feel sadness and grief though, she allows me to talk openly about the loss of Beau and recognizes how big of an impact this whole situation has had on me and often she’s the one who starts off the conversation, however, even in those vastly emotional moments where you would assume I would be “back in my body” I still feel isolated from myself and I wonder if it’s because of the shame I feel for “still being emotional” even though “it’s been so long.”

On the surface I can say that I don’t think that I’m forcing myself to try to get over Beau’s death. I don’t think I’m actually shaming myself for having a long period of grief, but at the same time I think there’s a part of me that admits that I don’t feel like it is acceptable to grieve him for this long publicly, or that I’m embarrassed to burst out into tears almost every time I say his name.

But, and I say this mostly to myself, is that not acceptable? Did you not just talk about how much time you spent with the wee lad? 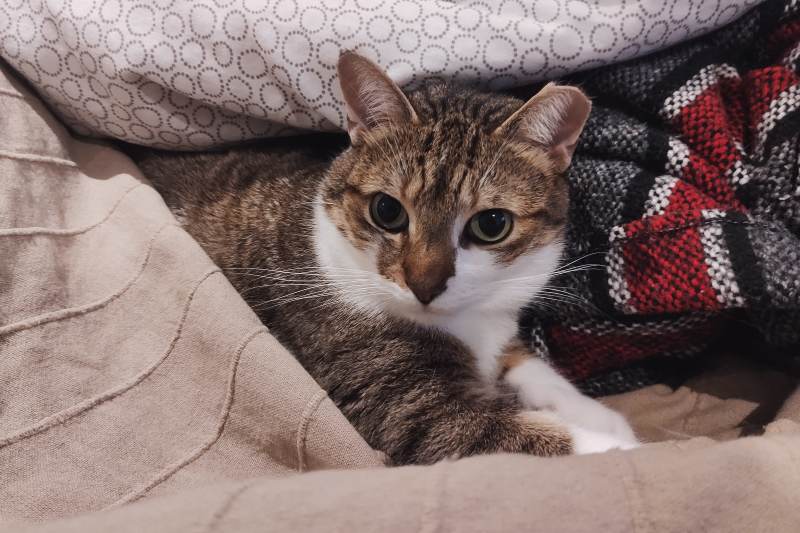 Beau was my everything for at least 5 years.

I was so excited to buy him a new toy to try, a new bed to sleep in, hell, I was even so happy to bring him home a new sister who he fell in love with and big brothered so impeccably.

Beau was my child, who I learned to pill and syringe feed and water whenever he was sick, who I always held to make him feel better, who I chose to fuel the drive to work and better myself.

I’m still reaching out for Beau, wanting to pick him up and hold. I’m regularly dreaming about Beau and dreaming that he’s still with me.

Beau was truly the gentlest of all cats. The best of all cats and while I hate to say that when I have two sweethearts at home with me, it doesn’t feel the same at all.

Even when Kalista or Mishu sit in my lap to cuddle while I’m at my desk, which is extremely rare, it doesn’t feel the same. There’s an odd amount of sadness that I feel. As I typed that sentence, Kalista just popped her head up and climbed onto my chest to get pet.

Admittedly I’m currently laughing since she’s biting me to get pet more and I’m very glad that’s currently my response, because I’ve been feeling rather apathetic towards her as of late and I’m wondering if this is just a sign that I’m coming back into myself.

I’m going to end this post here though so I can give Kalista the cuddles she wants and deserves, but will keep you updated on what’s going on and hopefully things will become more normal soon.

Thanks for getting this far and reading this. I truly appreciate it. 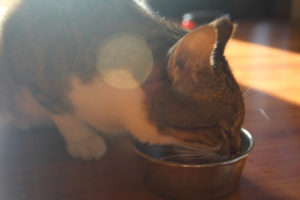