When we first took in our chinchilla, Gary, we didn’t know very much about chinchillas. We pretty much only knew that they were small mammals that needed to eat a diet that consisted primarily of hay.

I’ll be honest, at the time I wasn’t thinking about what taking care of a pet who ate a diet that consisted primarily of fibre really meant. It didn’t take very long for me to discover that our new little guy would be pooping all over his cage.

More poop meant more frequent cage cleanings, which quickly became a normal routine for my partner and me.

My mother recently babysat our cats and chinchilla and one of the messages she sent us while we were away was, “he poops a lot.” My partner and I laughed because we forgot to tell her how much Gary actually poops and how frequently. I think she was most surprised to see Gary pooping on his fresh towel almost immediately when she changed his cage.

Now poop may be a turn off when it comes to babysitting or adopting a new pet, but there are different types of poop out there, and let me tell you chinchilla poop is not hard to maintain. 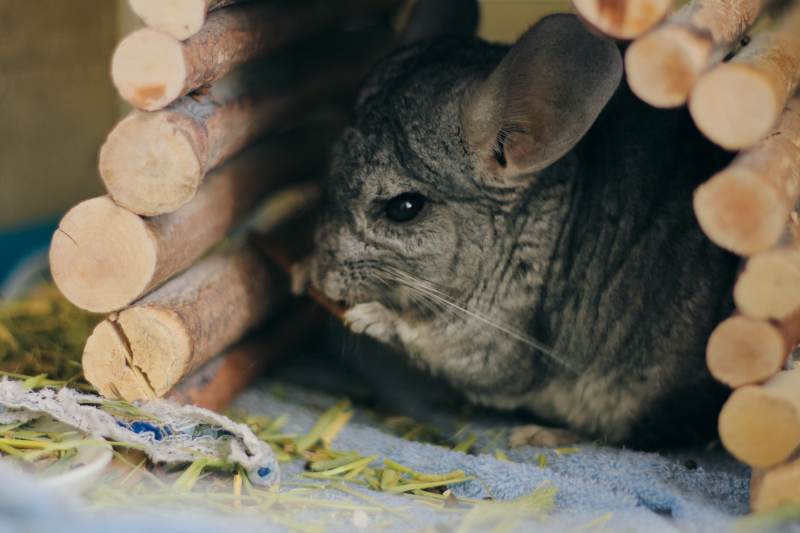 HOW OFTEN DOES A CHINCHILLA POOP IN A DAY?

Chinchillas will poop about 250 times on average in a day.

That being said, if you’re someone who likes to hold their pet while playing with them, expect your chinchilla to poop on you throughout.

Chinchilla poop should be round and solid. Unlike cat poop, dog poop or even human poop, chinchilla poop doesn’t have a discernible smell.

This makes cleanup very easy to do and makes chinchillas a fairly odourless pet to keep around the house.

This also means that if a chinchilla was to poop on you, you wouldn’t have to clean out stains from your clothes as chinchilla poop should not soil your clothing.

CAN YOU POTTY TRAIN A CHINCHILLA?

We actually have a litter box in our chinchilla cage, however, I can’t say that I have trained Gary to use it.

His previous owner told us that he uses it whenever he needs to go pee, and I would say that the majority of the time he does. There are still some times that I see him pee outside of his litter box, especially on the towel.

HOW DO YOU CLEAN AFTER A CHINCHILLA?

There are two steps to ensuring that your chinchilla is kept clean. First, make sure that you are giving your chinchilla a dust bath every three days or so, although this will depend on the humidity of your house. That being said, keep an eye on your chinchilla’s skin and fur as you give them their dust bath to see if their fur is getting matted or skin is looking too dry.

It is also important that you clean out your chinchilla’s cage every 2 to 3 days to ensure that their home is always kept clean. This includes washing the towel, clearing out the bedding, and cleaning the cage with water & vinegar.

Cage cleaning is important as bacteria can grow if your chinchilla’s cage is left uncleaned.

IS THERE EVER TOO MUCH POOP WHEN IT COMES TO CHINCHILLAS?

From the knowledge I have, I don’t believe there is usually a concern when it comes to a chinchilla pooping too much. That being said, if your chinchilla is not pooping I would be much more concerned.

Chinchillas who are not pooping commonly have blockages or potentially an underlying condition. This is why it is important to keep track of your chinchilla’s habits and see if anything changes.

If you notice that your chinchilla’s poops are not solid and instead are runny or are an odd colour make sure to contact the vet immediately. Chinchillas don’t have digestive programs when fed the proper diet and given the proper amount of exercise.

Chinchillas tend to hide their illnesses, so it may be difficult to diagnose that your chinchilla is sick. That’s why it’s also important to check in on your chinchilla’s fur, feet, teeth, and poop every time you’re by the cage.

I THINK MY CHINCHILLA IS EATING THEIR OWN POOP!!

This process is called coprophagy and is when a small mammal, such as a chinchilla, will eat their poop to digest undigested nutrients and vitamins that they did not get from their food the first time through.

That being said, chinchillas will not pick up any poop that has fallen on the ground to eat it. This makes it less concerning for the pet parent as the chinchilla will not eat old fecal matter.

MY CHINCHILLA THROWS THEIR POOP, WHY?

Honestly, this is something new that I’ve heard a few times now. I’ve personally never seen Gary throw his poop in my time having him. However, it seems like some chinchillas have been known to throw their poop.

It doesn’t seem that there is a whole lot of information on the topic, however, the Houston ASPCA writes on Chron that this is due to stress and chinchillas may also throw litter or even food.

They go on to state that this may also be frustration from lack of attention and may require a closer examination to see why they are acting out.

CAN CHINCHILLAS GET DIARRHEA?

Absolutely they can. Chinchillas most commonly get diarrhea when they have eaten too many treats, have a parasite (usually water-borne), have an unfit diet, or a change in their diet.

Diarrhea looks much different than a healthy poop and will be soft, sticky and may even have a layer of mucus on it. This is also the only time that a chinchilla poop should smell.

If you notice your chinchilla constantly getting diarrhea, talk to your vet about their daily activity and food to ensure that your chinchilla has no underlying conditions.

Although it may be shocking how much your chinchilla is going to be pooping, it’s important to note that this is normal and very easy to deal with.

As is with most things pets, if you notice any changes to your pet’s behaviour, poop consistency, fur texture, etc, make sure to contact a vet immediately and make sure that everything is okay.

So I’m curious pet parents, how much does your chinchilla poop? If you don’t have a chinchilla are you surprised they poop so much? Let me know in the comments below! 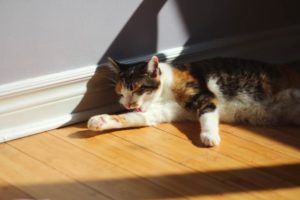 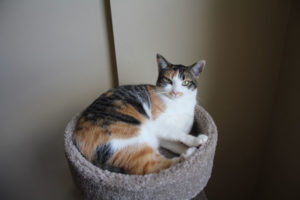