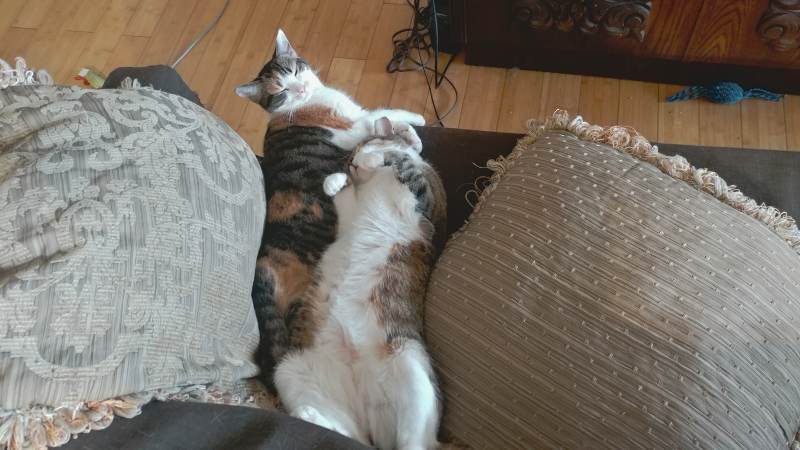 If you come from a multi-pet household you definitely understand the stress that comes with adopting a new furry friend.

Although we were fairly certain Beau would get along with a new addition we weren’t completely certain that they would bond.

WHAT WE WERE LOOKING FOR IN A CAT

When we were first looking into adopting a new kitten, we wanted to make sure that she was female. We made this decision because we noticed Beau didn’t do well around “Alpha cats” like Walker and we thought the chances would be higher that Beau would take the “Alpha role” if the cat we adopted was young and female.

All that being said, we also had a kitten sneak into our condo a long while back and Beau got along with her swimmingly! Although a lot of the time was spent sitting and cuddling with me, Beau got in a good amount of playtime with her, which was awesome!

When we first started to re-open the chapter of adopting we looked at 4 different rescues. At the time there were hardly any young female kittens up for adoption at any of the rescues and most of the female cats were 2 years or older.

Disheartened, I told my partner that we might have to wait a bit longer before we adopted.

Then we stumbled upon the Forgotten Ones Cat Rescue site. I had been aware of the rescue for about a year at that point, but I had never worked with them or had met any of their team… and there she was… our Kalista with her two other brothers.

THE RESCUE’S DESCRIPTION OF KALISTA

At first glances, we didn’t know if Kalista would do well in our home. This was some of the information we had been given about her:

My main concern was the fact that Kalista didn’t seem to interact with any cats other than her brothers. As much as I love cats, I only wanted to adopt a cat if they were going to get along with our cat, Beau.

The concern that came shortly after included the fact that Kalista was finicky (only eating very low-quality food).

If you know anything about me, you know I’m a super stickler to trying to find quality foods for my cats. I spent a lot of my time working in the pet store reading up on foods, contacting companies to discuss their products and trying to figure out what foods I could feed Beau that would help aide him with his Pica as well as his constant urinary battles.

That being said, I knew that with the amounts of high-quality cat food there was definitely going to be one that Kalista was going to take to… there just had to be! Although, I’ll admit… I made the terrible joke that we’d get rid of her if she didn’t eat… Glad we didn’t though!

*Photo from Our New Cat is Home! (Cat & Chinchilla Photos)

When we first brought Kalista home she was very, very small and skinny. She was also terrified of absolutely everything.

My partner and I rotated nights where we’d sleep with her while she was separated from Beau, but let me tell you… it was very hard to keep them separated.

Even within the first hour of having Kalista in our home, Beau was overly curious and wanted to play with her every second he could. He spent so much time meowing under the door, pawing at it to try to get her attention… but she was curled up in bed scared for her life.

We actually had to syringe feed Kalista for a few days because she refused to eat or drink. You should have seen my Facebook, all it was was me asking anyone if they had any other tips or tricks I haven’t heard of to get your cat to eat.

It took us much less than a week for us to open the doors between the two cats. Kalista acclimated to our bedroom fairly quickly and had a number of high up hiding spaces that Beau didn’t care to venture to.

…and they still do.

I can’t say every day is perfect in the Pets Overload household and some days you just have to let your cats be cats, but man these two can get into some serious battles.

The thing is… throughout these battles these two have always wagged their tails. Neither of them seems to puff out there tail or get extremely territorial, but it can still be a bit scary.

Battles last between 30-seconds to a couple minutes I would say, and they include biting, swatting and pouncing.

Every so often you can catch a little yelp, commonly from Beau, because Kalista hit him too hard or was a bit too rough. And even though the doors stayed pretty much open, the cats were supervised extremely closely to make sure that they weren’t actually hurting each other. 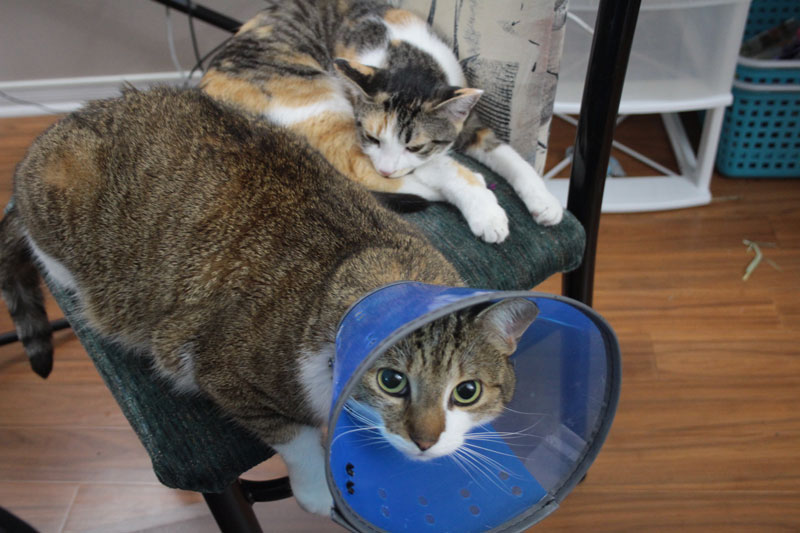 *Photo from Our Kitties Are Getting Along! (Photos of Cats & Chinchilla)

THEN THEY STARTED COPYING EACH OTHER

This was truly the cutest part of the beginning of their relationship. It truly seemed like our cats were teaching each other how to do new things.

One of the biggest examples is when Kalista taught Beau how to use a laser pointer. We had been trying to encourage Beau to play with one for years before adopting Kalista, and we actually thought he was partially blind or didn’t see the laser… but I guess we were wrong.

Beau just needed a little sister to show him how much fun a little red dot could be!

Beau then started opening up to Kalista, showing her how he got us to give him food or give him cuddles. Honestly, I was a bit worried that he would teach her to chew on things that weren’t food… but she was already doing that with the cardboard. Little bugger is still chewing on cardboard, even if she has a big helping of food waiting for her.

AND THEN THEY BECAME INSEPARABLE

After a few weeks, Beau and Kalista wouldn’t leave each other’s sides.

If one came into the room, you would often see the other come trotting right after. If you were worried that one went missing, you just had to look on the other side of the curtain or pillow.

These two cats always slept together, ate together… did everything together! Though… it did take a while for them to start properly cuddling. 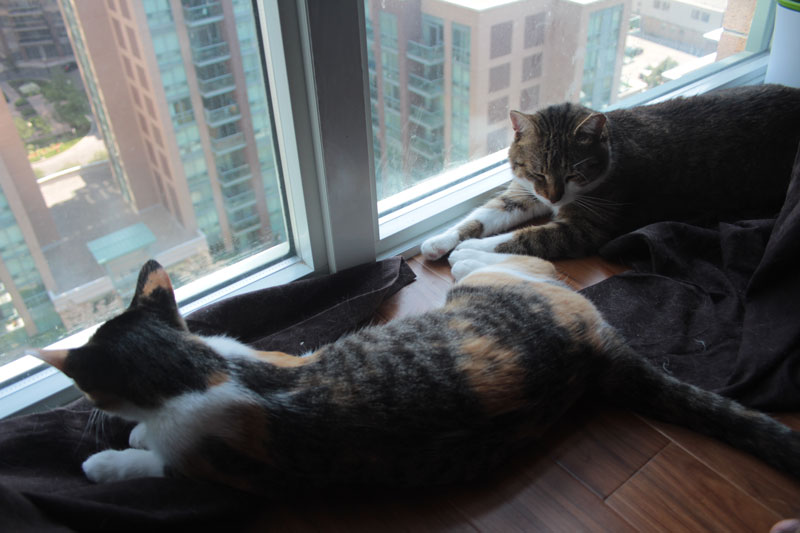 KALISTA WAS HESITANT ABOUT PERSONAL AFFECTION

Kalista is a kitten who didn’t want her heart broken. If Beau would go up to her to cuddle, she would walk away… hell, we still can’t fully hold her to this day!

Kalista always had to be a few inches away from Beau at all times, even though she wanted to be close to him.

It seems she accepted Beau as her big brother fairly quickly, but there was still a lot of trust they had to work on if she was going to give him all of the loving he wanted.

I would say that Kalista and Beau didn’t get as close physically until after we moved and they both had to find peace in a new territory.

It might have also helped that I ended up getting a pretty much full-time position working, so the cats were basically home alone all day.

Whatever it was, it made Kalista and Beau appreciate the friendship that they had and we could find them cuddled up together throughout the day.

BUT IT DOESN’T SEEM TO END

You wouldn’t think that cats could get any closer, but they really do.

I’ve mentioned it a few times, and I’m sure you’re going to hear more about it… but Beau truly cannot be separated from Kalista now.

Anytime they’re separated, the first thing Beau does is look for Kalista and cry out to see if she’s okay. The only exception to this rule is when they are both sleeping or Beau is asleep.

I wouldn’t say that these two are completely dependant on each other, especially because as I write this Kalista is sleeping in our bed and Beau is on the couch.

The thing is, each day it seems like these two are getting more and more comfortable with each other and doing the strangest and funniest things together. I couldn’t imagine their lives separate and I would never want to separate them!

That being said, it is making me want a third when these two are older. I would have for either of them to be alone when they grow old, especially because Kalista hasn’t experienced what life is like as a lone ranger.

Well, here’s to my two cuties! I’m so glad they got along and that they continue to get along. They truly bring happiness into my life. 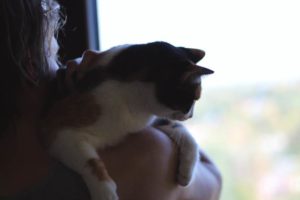 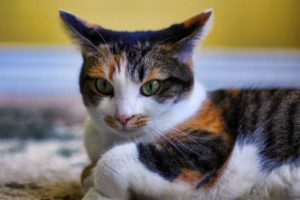