Growing up there were a lot of “cat facts” thrown around that had little merit, though they always had some sliver of truth. One of the most notorious examples of a “cat fact” is that “cats are all female and dogs are male.” While this “cat fact” is clearly not true, in many languages dog uses a masculine article and cat uses a feminine, which I’m certain is where my confusion came from.

Another common “cat fact” I heard growing up was that cats could see perfectly in the dark. Some would take it as far as saying that cats couldn’t see as well in the day, which is why they prefer night. While there were already other justifications for why cats

When I adopted my first cat I quickly realized how active cats get at night and I joked quite often that I thought he was schizophrenic. Walker was fairly calm the rest of the day, spending the majority of it would spend lazying about on the couch.

Over the years to come, I would witness similar behaviours from all of our cats, especially Kalista who will stand by the window to hunt little creepy crawlers who walk in. The only thing is, animals do not require much light or even sight to be able to hunt! 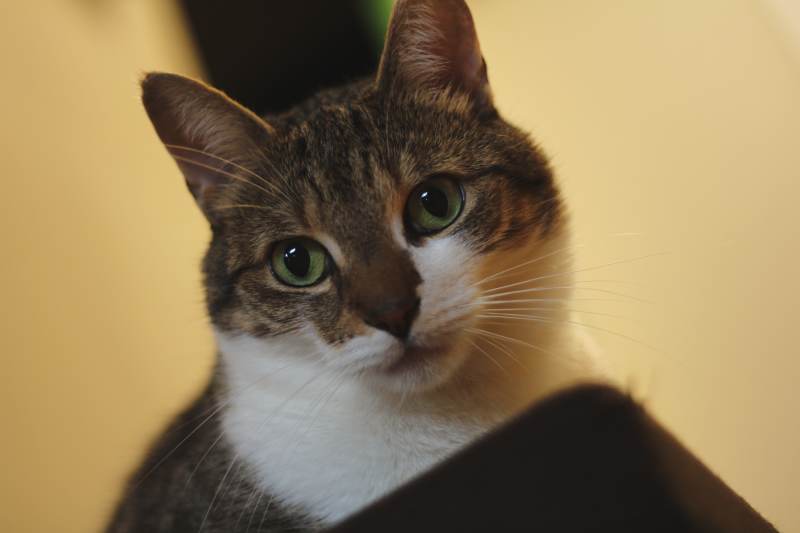 Shockingly, no cats are not considered nocturnal. Due to the fact that cats are most active during dawn and dusk, cats are classified as crepuscular.

Similar to Chinchillas, cats may be awake throughout the day dependent on what is going on. Cats may also choose to hunt in the daytime though it is less common.

HOW IS THE CAT EYE DIFFERENT THAN THE HUMAN EYE?

The most drastic difference between human eyes and cat eyes is the way that we see colour. Simply put, the retina contains photoreceptor cells called rod and cones. Animal species have a varying amount of either which will alter the way that they see the world.

Rods assist with night vision, peripheral vision and also help differentiate between brightness and the different shades of gray. Cats have a high concentration of rod receptors in their retinas, which is why it is easier for them to see during the night.

Cones, on the other hand, are in control of the way that colour is perceived as well as day vision. So, as you can guess, a human’s retina has more cone receptors than rods, meaning that we have an easier time differentiating between colours. Since we do not have a lower concentration of rods, it is more difficult for us to see at night.

Cats’ eyes also contain a tapetum lucidum, which is a reflective layer of tissues that bounce light back into the retina. Although many animals have many forms of tapetum, including retinal tapetum, choroidal tapetum fibrosum and choroidal tapetum cellulosum, humans do not have any form of tapetum lucidum. The placement of the tapetum will help animals see at varying levels of light.

An animal who has a form of tapetum lucidum may also appear to have glowing eyes in certain situations. So, if you’re someone who struggles to get a good picture of their cat with flash, like us, blame your cat’s biology! Glowing eyes are useful when you have a kitty who likes to run from you and hide, especially when you’re walking around with a flashlight.

Fun Fact: Cats have a field of vision of 200 degrees, while humans can only see 180 degrees at a time.

SO CAN CATS SEE IN THE DARK?

Given the information, we have about the difference between cat eyes and human eyes we can conclude that cats “see in the dark,” however, can see better in the dark than humans.

The simplest way to explain why there’s a difference between seeing in the dark and seeing better in the dark is because cats still require some sort of light to see. Cats will continue to struggle to see in extremely low-light situations, but according to Purina UK cats only require a sixth of the light humans need to see.

Similar to the way human eyes work when a cat’s pupils dilate they let more light in, allowing for better vision, especially at night. You may notice your cat’s pupils change throughout the day, becoming very thin in the daytime and expanding during the night. Having widened pupils and tapetum lucidum can help a cat see 135-300x more in the dark, while humans are said to see only a maximum of 15x more.

Though cats can technically see more, due to the amount of light, when a cat’s pupils dilate their vision becomes much more blurry. Nickolay Lamm, a graphic designer and researcher helped emulate how cats see in the following post. I would recommend taking a look at his photos because they surely baffled me!

Tying into the amount of dilation a cat’s pupils can go through and the blurriness caused by a dilated pupil, cats can’t see nearly as far as humans. It is said that humans can see up to 5x further than cats as cats are truly near-sighted. Now, being nearsighted doesn’t mean that a cat can see things perfectly up close, as cats will still experience some forms of blurriness.

We, for example, noticed our cat Beau cannot see laser pointers when they are too close to his eyes. You may notice similar representations of your cat’s visual limits when your cat dips their paw into their food bowl, water bowl or has to sniff around to find food that is right in front of them. Admittedly, your cat may also paw at food in their bowl because they are acting picky or because the bowl you provided your cat causes discomfort or whisker fatigue.

Shockingly, cats can see ultraviolet light/blacklight, unlike humans who have a lens in their eye that blocks the UV light.

Due to the fact that cats can see ultraviolet light, it can be safely assumed that cats would be able to see in situations where a room is “pitch black” but ultraviolet light is present. A room may be flooded with UV light that we are not aware of and will still appear as pitch black to the naked human eye. So, get those black lights out and let your cat have a party!

Something I learned today was that Monet painted using ultraviolet pigments because he could see UV rays after removing the lens from his eye. Removing the lens in one’s eye is a common practice for those who receive cataract surgery.

SO HOW FAR CAN CATS REALLY SEE?

According to Catster, who references Hazel C. Carney, D.V.M., MS, Dipl. ABVP, of WestVet Emergency and Specialty Center in Garden City, Idaho, cats can see up to 120 feet away, though about 40% of cats cannot see objects that are within a foot of them.

DO CATS RELY ON THEIR EYES TO SEE AT NIGHT?

Cats may also be seen marking or scenting areas or objects by bunting, rubbing themselves against, or kneading them. Cats will scent or mark objects as a way of letting other animals in the area know that the area is their territory, which in turn also allows the cat to know that they are currently safe in that area. Wild and outdoor cats will also take notice of other animals’ scents from urine, feces, and similar scenting behaviours to bunting in hopes of stalking prey or staying safe from predators.

In regards to whiskers, since a cat’s whiskers are extremely sensitive they give a great sense to a cat’s surroundings. Whiskers help a cat know whether or not they will be able to fit into small areas and will alert cats if something brushes by them. A cat who has lost their whiskers may become disoriented, especially if they rely on their whiskers to get around.

Cats also rely on their sense of hearing much more than humans do. You may notice your cat’s ears twitch from side to side, sort of like a satellite antennae. Cats will point their ears into the direction they hear a sound, even when asleep. Cats may also meow at each other at night to let the others know where they are.

WHY DO CATS NEED “NIGHT-VISION”?

It may feel like an obvious question, but it is believed that cats have evolved to have night-vision and vertical pupils as a way of becoming better predators during the night.

Studies have shown that many night hunters have vertical pupils, which allow for a more precise distance gauge, especially while running. It is also believed that cats benefit from their pupil shape as vertical pupils can help see both at night and day, further supporting that cats are crepuscular and not nocturnal.

Cats biology is extremely intricate and directly affects the way that they act and react with the world around them.

So I’m curious, are your cats great night dwellers or do they have trouble getting around? Which sense does your cat rely on the most? Let me know in the comments below! 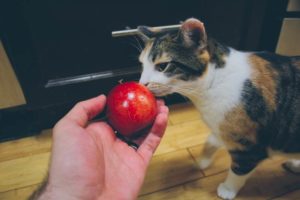